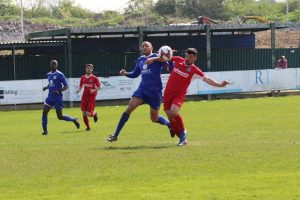 The Bees continued their quest for promotion with another three points as they defeated Woodford Town at the Ho Ho Stadium.  All the goals came before half time and the scoring began in the 11th minute when George Whitby netted, and then Jack Adlington netted three minutes later to double the hosts lead.  And then right on half time Adlington netted his second and the Beess third as they remain level on points with 2nd-placed FC Romania.  Woodford now drop to 13th as a result of this defeat.

Takeley put the misery of Thursday evening behind them to end Enfield’s long unbeaten run as they came away from Barrows Farm with all three points.  The visitors netted the opener deep into first half stoppage time through Stuart Zanone before sealing the points with two minutes to go when a deep free kick into the box saw Thomas head past his own keeper Hocking-Rising meaning Enfield remain in 9th and Takeley in 5th.

Hosts FCR remain 2nd on goal difference after they saw off a plucky Tower Hamlets at Theobalds Lane.  The hosts took the lead from the spot through Gabriel Ghinea after a hand ball inside the box by a defender, however the visitors managed to find a leveller via Montel Williams to stun their promotion chasing opponents.  However eight minutes into the second half the hosts retook the lead through Andrei Baciu, and then the visitors went down to ten men after a second yellow card for a reckless tackle.  With fifteen minutes remaining the visitors’ manager was then sent from the dugout for dissent as frustrations boiled over, and thereafter the host sealed the points by adding a late third through Sergiu Florin.  Hamlets slip to 12th after this defeat.

GWR moved closer to promotion and the ESL title after seeing off Clapton at Burroughs Park.  The visitors took the lead in the 21st minute through Steve Sardinha however the hosts levelled a minute later from a Billy Johnson free kick.  And the hosts led at the break thanks to Neil Richmond’s goal before half time and then increased their lead when Johnson grabbed his second of the game on the hour mark, and although Nathan Cook then pulled one back for the Tons, the hosts picked up the three points to remain five points clear at the top.  The Tons remain in 6th spot.

Wick won their first game after their relegation to Step Six was confirmed as they beat Hullbridge Sports at The Old Spotted Dog.  The opening goal didn’t arrive until just past the hour mark and it was the hosts who grabbed it when a cross from the right saw Tony Cookey arrive unmarked at the back post to score, and then just five minutes later it was two when a shot from the edge of the box by Joel Appiah found its way in.  The visitors set up an interesting last few minutes when netting with eight minutes to go when Jimmy Cox and Matt Dicks combined to see the latter’s effort deflect to Luke Hornsley who tapped home, but the hosts sealed the win when Cookey added his second of the afternoon with five minutes left, and give Wick their ninth win of the campaign.  Sports slip a place to 16th and are seven points above the drop zone with three games left.

It was a game of two halves at Cricklefield as the derby saw Barkingside come from behind to net a crucial three points against The Foxes.  The Foxes, who have been woeful of late, dominated the opening forty five minutes and lead at the break from a Jake McWee strike in the 16th minute. However the second half saw Side dominate proceedings and net three second half goals through Roddy Lemba, Michael Ogboin and James Briggs to take the win, and lift them into 15th and seven points clear of the drop zone.  Ilford drop to 11th and outside the top ten after yet another defeat.

Manor all but confirmed their Step Five status for next season after a dramatic comeback win over Sawbridgeworth Town at Southchurch Park.  The Robins stormed into a two goal lead but then saw their keeper sent off for handball outside the penalty area, however they netted again before half time to lead 3-0 at the break with Matt Frew, Daryl Doolan and Jack Cousins the Robins marksmen.  But Manor showed unbelievable character and with the extra man stormed back to net four second half goals through Lewis Sparrow, Alfie Lindfield, Brennon Nolan and Lee Delf to take an incredible victory and all but confirm their safety, now eleven points above the dropzone in 14th.  Sawbo, who would have been stunned by this loss remain in 8th.

Sporting Bengal United netted a terrific victory over promotion chasing Redbridge to break their record points tally for a season in the ESL and climb into the top ten as a result.  This despite the game being switched to Oakside and it being a midday kick off but the hosts for the day netted the opener in the 17th minute when Redbridge keeper Lewis Green saw his clearance thump against Sporting striker Bobby Redwood and into the gaping goal behind him.  However the visitors for the day managed to find a leveller four minutes before half time when a terrific free kick swung in by Eljay Worrell found Brian Moses who glanced a header into the far corner.  Sporting though weren’t to be denied though and with around fifteen minutes left grabbed the winner when after great skill on the left by Steve Carvell, his ball in eventually fell to skipper Freddy Tandon who rifled an effort into the roof of the net, and it meant victory for Sporting and a body blow to The Motormen’s chances of promotion, now three points behind FC Romania and Basildon United in the race for second place.

Forest came from behind to grab a huge win against fellow relegation rivals Stansted at Kitchener Road in Walthamstow.  The visitors took the lead slightly against the run of play when Ryan Ramsay converted from the spot after a foul inside the area, however the hosts managed to find a leveller when after the visitors failed to clear their lines, allowing Elias Siligato hit a fine effort which took a deflection beyond Whymark and inside the near post.  And then it was disaster for Stansted when they conceded a penalty and saw Clayton red carded for the handball on the line, and Shomari Barnwell duly converted the spot kick and the hosts had the lead.  Stansted missed chances in the second period to try and salvage something from this one, and it means Forest now go five clear of the drop zone whilst Stansted are now in the bottom four and only three points above the drop zone.

Hosts West Essex are now just one points off 6th with three games in hand after coming from behind to thrash relegation-threatened Wadham Lodge at Mayesbrook Park.  The visitors took an early lead through Paul Oshin but then saw Michael Mignot level before the break to see the teams go in level.  Lodge saw two penalties saved by keeper Dan Russell thereafter and then capitulated and saw another goal from Mignot plus strikes from Isaac Marfo, Tom Macleod and Josh French seal the points, leaving Lodge in the bottom three and three points from safety.