Thurrock Labour: “We need a council for the many and not the few” 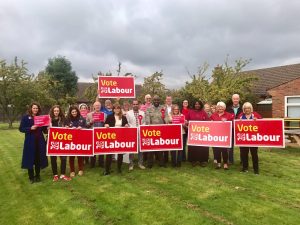 THE local elections on Thursday 3 May to decide who runs Thurrock Council are now just a few days away and Thurrock Labour are concluding their campaign by re-emphasising their determination to run a council that delivers a safer, cleaner, fairer borough for the many not the few.

The Thurrock Labour Party is the only party in this campaign to publish a detailed manifesto outlining their policies should they win control of the council. The manifesto covers all the issues that matter to local residents, from parking to air pollution, from crime to housing, and you can read all the details at: http://www.thurrocklabour.co.uk/thurrock_labour_2018_manifesto

Thurrock Labour argues that this vision gives residents a clear choice at this election and shows that only Labour will run a council for the many not the few.

Contrasting Labour’s plans with the opposing parties, councillor Oliver Gerrish said: “There couldn’t be a sharper difference between Thurrock Labour’s vision for a safer, cleaner, fairer borough and the approach of the other political parties.

“A Labour council will serve all Thurrock residents and we will end the Tory neglect of areas like Tilbury and South Ockendon. Labour’s plan for investing extra money to tackling fly-tipping, improving road and verge surfaces, and tackling parking hotspots will mean that no estate is left behind and we all have streets and parks to be proud of.

“Whereas the Tories have closed police stations in Corringham, Ockendon and Tilbury, a Labour Council will crack down on anti-social behaviour.

“While the Tories have spent the last two years using Thurrock residents as a convenient cash cow, hiking council tax by 10%, charging elderly residents in sheltered housing and trying to impose a ‘grass tax’, Thurrock Labour will help families struggling to get by. A Labour Council in Thurrock will maintain the lowest Council Tax in Essex.

“While the Tories have failed to clean up Thurrock, Labour will fight to protect our countryside and will take real action to tackle the air pollution that threatens the health of residents across the borough.”

“Above all, a Labour Council will stand up for the people of Thurrock rather than getting into power and forgetting about who put them there as the Tories have done.

“We will continue to loudly oppose a new Lower Thames Crossing that would change the area forever, we will challenge the Tory plan to build thousands of extra houses on our greenbelt, and fighting to keep Orsett Hospital open will be at the top of our agenda.

“Our NHS, our local services, and our communities need a Council with real backbone to stand up for them. That is the council that Thurrock Labour would lead. Vote Labour on Thursday 3 May for a Council that will serve the many not the few.”

One Response to "Thurrock Labour: “We need a council for the many and not the few”"