Crime in Tilbury: Councillors : “Police gave up the fight against drugs long ago” 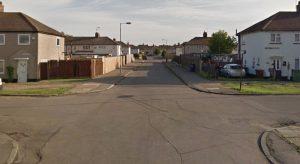 TILBURY councillors have made a withering attack on police and politicans as violence erupted on their streets at the weekend.

Leighton Gardens and Melba Gardens have been the centre of a number of disturbances over the last year.

At the weekend there was another large disturbance with reports of firearms and crossbows being used.

Cllr Steve Liddiard said: “I think the police gave up the fight against drugs, several years ago. Drug dealers are in every road. The gang culture is developing. Young men 13 upwards are being groomed.

“At 13 it’s cool to know a drug dealer and be able to make a quid every delivery. When turf wars erupt, these kids are in the middle and get hurt. Knives are carried by the hardened and the frightened. Guns are quite rare but are available to the drug bosses.

Why is it that local people know the culprits but fear reprisals and say nothing? Why do police downplay the seriousness of this evil. Politicians won’t admit failure.

‘The drug dealers survive because residents fear retribution. Smoking skunk can be smelt , if not seen, in every street. I also get to see the the few who steal, prostitute themselves or become mentally ill through substance abuse.

There are too many addicts who are willing to be the receiver of packages in the post for a quick fix.

Parents are generally naive to their children’s activities. Snapchat and instagram are the communication tools.

Police have all the tools to fix this problem, so why don’t they? They might be scared, they might turn a blind eye, there may be corruption but more likely, not enough police to cope.

Thurrock Independents’ Tilbury Cllr, John Allen said: “I have been calling on the Conservative’s Police, Fire and Crime Commissioner to put more police in Tilbury but so far we have seen nothing.

“When he came to Thurrock Council recently I asked him if he believes that parts of Thurrock have become lawless. He dodged the question, if he honestly felt he had control of the situation in Thurrock he should have been able to answer that question.

“A year ago he was happily taking services out of Tilbury. Unfortunately his model of policing by numbers on a spreadsheet isn’t working, residents are sick of the poor 101 service and have given up reporting incidents to the police. He needs to get more police on the beat, have a visible presence in Tilbury everyday.

“Residents can be forgiven for believing that neither the Council or the Police, Fire and Crime Commissioner, have any real interest in helping the people of Tilbury.”

As there is a local election in this area on May 3rd, here is a list of the candidates.

6 Responses to "Crime in Tilbury: Councillors : “Police gave up the fight against drugs long ago”"