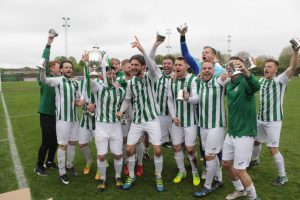 Braces from Carl Mullings and Stuart Zanone saw Takeley thrash Barkingside at Cricklefield at sees   Takeley remain 5th and will finish the season in that position regardless of how they do in their final two outings. Barkingside have posted enough points on the table to secure their safety.

Ramblers and Hamlets ended the season with a point a piece, which meant Ramblers finished the season in second bottom and Hamlets in 11th.  Ramblers took the lead through Ollie Hanlon however James Ross levelled for Tower Hamlets.

The Tons ended their season with a late win against Hullbridge Sports at The Old Spotted Dog to give themselves a chance of a top six finish.  Eight minutes before the break Clapton struck as a cross from the left found Nathan Cook who netted a tap in, however midway through the second half Hullbridge levelled as after Jimmy Cox had been pushed inside the box, he then dusted himself down to smash home the spot kick.  But there was to be a late twist in this one as in the 91st minute a cross from the right saw Jeffrey Cobblah get into the box and send an effort on the stretch past Jamie Merralls and give the hosts the win.  Sports are in 15th with just one game remaining at home to Takeley next week.

Rovers thumped West Essex at Burroughs Park to secure the ESL title and also promotion back to the Bostick League at the first time of asking.  Neil Richmond slotted home the opener right on half time before they doubled their lead four minutes into the second period when Stephen Butterworth converted a spot kick.  Sam Carter then powered a header past Coker in the 63rd minute to make it three before Nathan Dewberry powered a terrific drive into the top corner three minutes later to make it four.  And with eight minutes left Rovers sealed a memorable win and the title when Bayley Newell, who had just come on as a substitute, slotted home the fifth for the hosts to finish off a splendid campaign.  For West Essex they have one more game at home to bottom side Hackney Wick next week, and a win will see them finish in the top six.

The Motormen’s chances of finishing in the top two are over now after FC Romania’s win today, however they did come from behind to beat Hackney Wick at Oakside to see them win their final home game of the campaign.  Nelson Dihn had put the visitors ahead in the 29th minute but Remi Nelson levelled in the 57th minute before Dan Gilchrist netted the winner with fifteen minutes remaining.  Redbridge now travel to Basildon United on Wednesday in their final home game knowing a win will see them claim third spot and an outside chance of promotion if they are one of the third placed finish teams in step five to be invited to be promoted. Wick as we know we end the season bottom and complete their season away to West Essex next week.

A stoppage time leveller from hosts Sawbridgeworth Town denied Wadham Lodge three points that would have seen the visitors finish outside the bottom three but instead remain in their after just picking up a point.  Lodge missed a penalty after two minutes in what would have been a perfect start to the contest for the visitors, however the visitors did go in front midway through the half thanks to a Danny Francis effort, only to see Aaron Thomas level it up in the 28th minute.  And just seven minutes later Zak Johnson netted  to put the Robins ahead but Lodge came back and levelled themselves right on half time as Frnacis scored his second of the game..  And eleven minutes into the second period Lodge went in front with an Eli Benoit strike and it looked like that would see them pick up a huge three points, but in the 91st minute Mark Robinson netted a late equaliser for Sawbo, meaning the game ended all square.  It means Lodge are a point behind fourth bottom Stansted and two behind fifth bottom Barkingside with a game remaining which they have to win to keep out the bottom three.

There were no goals at Hargrave Park as both Sporting Bengal United and Basildon United drew a blank meaning the Bees know they must win their final game at home to Redbridge on Wednesday to overhaul second placed FC Romania and win promotion to the Bostick League.  Sporting end the season in 10th spot.

Forest came from behind to defeat Ilford at Kitchener Road meaning they can now breathe a sigh of relief knowing they will definitely finish outside the bottom three.  Ilford went in front when Chris Lockwood converted a penalty but Forest drew level with their own penalty from Shomari Barnwell after Tony DaSilva had been fouled.  And the hosts went in front when Josh Brimacombe-Ward smashed home, before Rhea Josephs tapped home at the back post to seal the deal and confirm Forest’s safety.  Ilford end the season with nine straight defeats and sit 13th in the division.

Hosts Woodford saw their final game at Goffs Lane end in a goalless draw as they managed to hold Enfield 1893.  The visitors had chances to take all three points however it wasn’t to be and it means Woodford are in 12th and Enfield 9th with both having completed their fixtures.