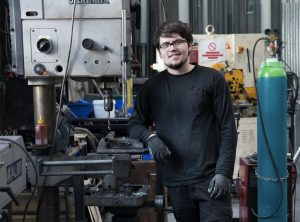 Cruze will be working for Delstar Tait, a world leader in designing, constructing and delivering live event equipment. The job will entail lots of time in America, somewhere Cruze has always wanted to work.

Having always had an interest in live events and theatre, Cruze began studying a technical theatre course and working part time in his family’s business, Lakeside Containers Services, where he, in his own words, ‘stumbled into metalwork’, helping convert and repair shipping containers.

After college, he was able to combine his love of theatre and metalwork by doing an apprenticeship as a scenic metalworker at the Royal Opera House Bob and Tamar Manoukian Production Workshop in Purfleet.

‘The apprenticeship has taught me how to take a drawing from a designer for a piece of scenery and turn it into a reality. I’ve learnt the specialist techniques for theatre set construction and how to use the tools such as welders, grinders and band saws. These tools, coupled with some engineering, maths, precision and patience, all come together to create and finish the scenery to the highest standard. The Royal Opera House apprenticeship was a perfect opportunity for me as it fused my love of metalwork and theatre together and opened up a door into this industry. It’s been incredibly satisfying to see something on stage at the Royal Opera House that I built,’ he says.

Mark Pursey is the Head of Construction at the Royal Opera House Bob and Tamar Manoukian Production Workshop. He values the role apprenticeships play in the work of the production teams: ‘Apprentices really do add something to the team, there is no doubt about that. The guys really enjoy having someone around they can pass their knowledge on to.’

Bendy Ashfield, Apprenticeships Manager at the Royal Opera House said: ‘We are thrilled that Cruze is moving to Delstar, though very sad to see him go. He has made the absolute most of every opportunity his apprenticeship has offered him which is evidenced by his move to Delstar. He is leaving with a Level 3 Welding and Fabrication Apprenticeship qualification and three years, wide experience in our workshop as well as at Delstar and Opera Holland Park where he went on placements. Whilst at the ROH he has also worked on our productions in several other venues including the national tour of Sukanya where he learnt an awful lot in a very short space of time. I have no doubt that Cruze will go on to brilliant things in the industry.’