AFTER coming close on a couple of occasions, Ash Sheppard finally won a race in the Stock Rods at Arena Essex on Sunday, dominating a dramatic final. 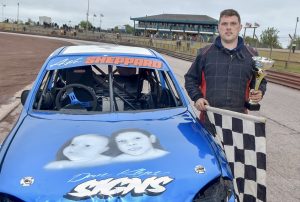 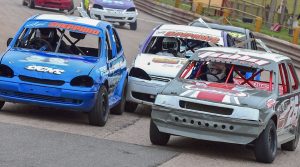 Sheppard led away from pole position and narrowly staved off Keenan Tully into the first corner with heat winner George Simmons looking for a gap between them. Simmons worked his way to the inside of Tully, but had no answer to Sheppard’s pace, Sheppard able to pull out a good lead whilst Simmons concentrated on defending his second place. Heat winner and new driver to the class, Chris Harvey was the man who looked most likely to get past Simmons, pulling alongside on a couple of occasions and nearly making the move stick, but he was railroaded backwards when he found himself on the outside of a three abreast moment along the back straight.

Tully found himself punted into a two wheeled moment which lead to his retirement whilst the fierce battling behind Simmons came to a head in the final straight, with the big pack of cars spitting out fifth placed Luke Cornish as they took the flag, Cornish spinning wildly and narrowly being avoided by the rest.

Keireen Thomas dominated the Lightning Rods, winning all three races. He didn’t take the final in quite the same domineering style as the heats, Jay Page-Fuller and Nigel Carroll keeping him honest throughout the distance.

Charlie Santry and Danny Elbourn were the class of the Mini Stox field with Santry winning heat and final, Elbourn the other heat. Each race started with Stacey Coombes leading the way from the front, but she was caught by the star graders in the final few laps and finished outside of the podium positions. Charlie Lobb was the best of the rest with a pair of third places during the afternoon, but he was beaten by Josh King to that honour in the final.

Finally the second round of the National Micro Banger World Series was a relatively quiet affair although Jodie Cheeseman found herself the focus of attention for Team TMT in the heats. The crash of the day came in the third heat when Matt Butcher ran Dan Farmer flat out into the turn one wall. The heat winners were Lewis Canham, James Steel and Dean Goodearl, whilst Goodearl also went on to secure the final. The Destruction Derby provided a number of spectacular crashes with Butcher again on the attack, this time demolishing team mate Gary Lee. Nathan Roberts put in a  big hit and then took a shot from Ricky Hutton. Hutton was in the mix in the final seconds of the event, but a massive hit from Alfie Crittenden sealed the win.