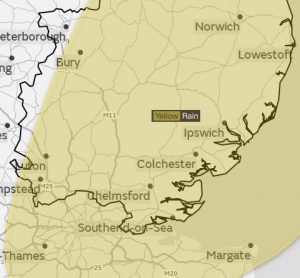 THE Met Office issued yellow weather warnings for rain across the region.
From Sunday evening until Monday night conditions are likely to be very damp, with up to 70mm of rain expected in some places – and strong gale force winds battering the area.As the rain falls thick and fast, there will be an increasing risk of flooding – making homes and businesses vulnerable.

Driving conditions are also likely to be difficult, with spray from the roads obscuring motorists’ vision.

Where flooding is at its worst, there is a possibility that roads will be closed. In severe cases, public transport services may also be cancelled or delayed.

Temperatures will remain below average for this time of year as the bleak weather brings with it a wintry chill.Yesterday the mercury reached just 11C, while today temperatures will struggle to climb past 9C.

Monday will also be “rather poor”,  as the region can expect highs of just 6 or 7C.

The Met Office yellow warning is in place between 8pm tonight and midnight on Monday.

The bleak conditions follow a bout of unseasonably warm weather that swept across the region last week, with temperatures peaking at 27C on Thursday, April 19 – the hottest April day for nearly 70 years.