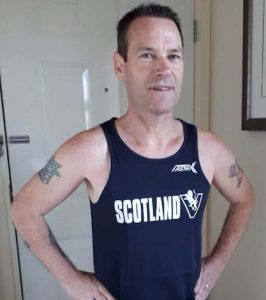 THURROCK Harriers’ were delighted to hear that Don Lawless has finally earned his Scottish vest. He will compete in the Home Countries International 10k in Manchester for the 50+ age group.

Best London Marathon performance came from Scott Rice. Scott is an experience campaigner now in the V45 category and all that experience showed in Sunday’s hot conditions when he ran a beautifully judged race to finish in 2h 58m.  The club’s three other finishers were Toby Draper whose 3h 5m effort was a good one in those conditions. Tim Martin, who finished in 4h 14m, a time very much affected by the weather. Joe Gregory finished in 4:37.

Also in London, on Sunday, were Finnlay Lowe and Hayley Instance who were representing east of England in the mini marathons.