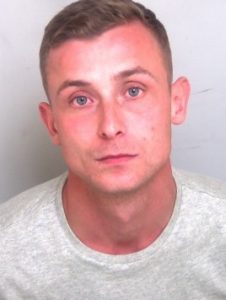 A DRUG dealer from Grays has been jailed for three years after officers found a large amount of cocaine in his car and home.

Joshua Tibble, 28, of Prince Phillip Avenue, received three years for possession with intent to supply cocaine and seven days for possession for cannabis, to run concurrently, at Basildon Crown Court, on Friday, April 20.

He was banned from driving for 15 months after he also admitted to drug driving and a confiscation order was made for £2,835.

Tibble was pulled over in Southend Road, Grays, at around 3.50pm on Sunday, July 2 last year, after he was found using his phone while driving.

A spokesperson said: “We searched his vehicle and found one cannabis joint in the door pocket and three wraps of cocaine in a yoghurt tub in the back of the car. We also seized a phone and a three-figure sum of cash.

Tibble’s roadside test for drug driving came back positive and he was taken to custody for questioning.

“We then searched Tibble’s home and found electronic weighing scales, a cutting knife, a mixing bowl, cocaine and a four-figure sum of cash in a bedroom draw.

“A total of 48 grams of cocaine was seized”.

Investigating officer DS Scott Fitzmaurice, of Op Raptor West, said: “Tibble was clearly living beyond his means, having already had lavish holidays during the year to Thailand, Las Vegas, Ibiza, and Hamburg.

“A search of his home and car revealed his involvement in dealing drugs and it was only a matter of time until Tibble was caught.

“He will now spend time locked in a prison cell.”