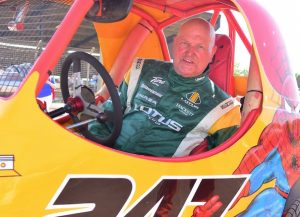 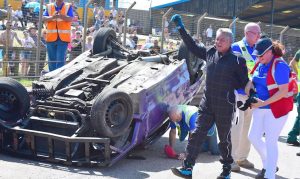 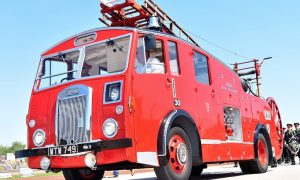 THE Cream Team were awarded the title of the 2018 Team Race Champions at Arena Essex on Bank Holiday Monday, as a bumper crowd enjoyed a packed raceday which celebrated 40 years of racing at the Thurrock venue and the life of the tracks founder Chick Woodroffe.

The first heat got off to an explosive start with Nathan Roberts spinning out Leslie Saunders, Saunders then getting collected by the pack and deposited in spectacular style onto the raised kerb on the inside of turn three. Ray Edmunds won the race and took first blood for Team Bump and Grind. Karl Douglas won heat two for the Cream Team and this set the stage for a showdown between the top two teams on the day.

An explosive start to heat three saw Bump and Grinds Jake Sheldon turned into the wall whilst Steven Pickering went flying onto the infield as the pack scattered in all directions. Alfie Lee took a tasty win for Team Cheeseburger.

The final saw Leslie Saunders Ford Ka get completely destroyed by Alfie Cornish. Despite the state of the car after the hit, Saunders was able to simply unbuckle and hop out unharmed, much to the relief of the watching crowd. It was quite a way to finish your first ever Banger meeting! From the restart it was always going to be an uphill struggle for ‘Bump and grind’ with the Cream Team fielding an A and a B Team and also benefiting from a degree of help from the Midnight Runners too. Ray Edmonds got held up by Dave Daws, allowing Tom Greenstreet to spin him round, Tommy Harding and Jake Sheldons failing car then becoming the focus of attention for the Creams. Bradley Lee took the win for Cream Team B, although they were beaten into second place by their A Team – Nathan Roberts, Karl Douglas, Tom Greenstreet and Jack Coveney. Bump and Grind successfully held on for fourth.

The Stock Cars got off to an explosive start with a rather unruly rolling lap resulting in the new car of Mick Wiseman getting clipped and drunkenly swerving into the wall and over onto its roof. Thankfully Mick was fine but his formula debut was very much shortlived. A chain reaction shunt further along the straight saw Dave Palmer’s meeting similarly end early with suspension damage.

Lee Madden dominated the meeting from that point on, despite the close attentions of Vic Bilkey Jnr. Bilkey was always frustratingly just a couple of car lengths away from being able to make a last corner bid for the win on a couple of occasions. Madden survived a clash with Alfie Jones halfway during the final, Jones getting sent hard into the wall and bringing the race to a halt whilst he regained his breath.

Kiereen Thomas won the first heat in the Lightning Rods after Jeff Rogers pulled out of the lead with a mechanical problem. Thomas’ winning streak of four straight races came to an unfortunate end in the next heat though with a big impact with the wall at the start cannoning him into the unfortunate Chris Reeve – the latter out in a new car following his write off a couple of meeting ago. Although the crash spelt the end of Thomas’ day, Reeve was able to return, his impact with the infield tyre wall only causing minor damage. Jay Page-Fuller picked up where Thomas left off, picking up the remaining two wins on the day and introducing little Connie – the newest member of his family to victory lane.

The Heritage F2 Stock Cars are always an impressive sight at Arena Essex and 73 year old veteran Andy Webb, rolled back the years by winning the first heat at a canter. He was handicapped in heat two and was unable to catch Phil Smith, but the race of the day was undoubtedly the final with Charles Barnes driving well but catching oil and spinning away the lead with a handful of laps to go. Webb and Smith duelled for the win over the final few laps but a small slide from Webb was all it took for Smith to make enough of a break to avoid a last bend attempt on the win from Webb, whilst a clash between Mike Walmsley and Nick Whitney resulted in a crash and damage for both cars, Granville Wright coming through for the final podium spot.

The next action at Arena Essex is on 20th May when the Back to Basics Banger class headlines the day, with supporting action from the Stock Rods, Lightning Rods and 2L Stock Cars. Start time 1pm.