AN incredible 107 young people from youth clubs across Central Essex came together to receive prestigious Jack Petchey Foundation Achievement Awards presented at Civic Theatre in Chelmsford on Thursday 4th May.

In addition, 13 adults were also celebrated with Leader Awards who have demonstrated, in an outstanding way, an ability to motivate young people. They received a medallion and a framed certificate.

Youth organisations Braintree, Chelmsford, Maldon and Thurrock have received funding of £1,349,040 from the Jack Petchey Foundation since funding started in 2007.

Danny Crates, Paralympic gold medallist said it was “another fantastic evening, celebrating the achievements of young people across the Essex region. I have attended several Jack Petchey Foundation events and I’m always amazed at how highly motivated the young people are. Whoever said aspirations amongst young people are dead, is highly mistaken as the citations read out were truly inspiring. A big well done to all.”

Theo Adesina, aged 15, attends Thurrock Harriers’ Athletic Club. Theo, who has been competing for a while both nationally and internationally, is currently the UK Champion in Pentathlon for his age group and is the National Sportshall Champion too.

Despite being incredibly gifted; Theo is very humble about his talent. He is supportive to the younger athletes and helps out however he can, always with a positive attitude. One of his fellow athletes said of Theo: “he’s a hard working supportive athlete. He is always there for other athletes and always helps the club.”

Theo decided to spend his £250 Jack Petchey Achievement Award grant on a new pole vault for the club, which he will use to train towards his new goal of becoming the UK No.1 in Heptathlon.

Alice Cundick, aged 12, attends St Thomas’ Youth Club. Due to illness, Alice missed quite a lot of school but still managed to do well in her first year of secondary school where she obtained good grades and received the school’s Year 7 History award.

Alice also volunteered as a librarian for her school and led a group of Year 7 girls in making a trailer for a cross-school competition, which they went on to win. Alice loves to read and write and recently received a Blue Peter Badge for a story she sent in this year! On top of this, Alice was part of two of her school’s productions: Alice in Wonderland and Midsummer Night’s Dream. This has sparked an interest in performing arts, and now she attends a performing arts school on Saturday mornings.

Outside of school, Alice has been committed to raising money for charity by hosting various events. Last year she held a coffee morning and raised £140 for Little Haven’s Hospice and now has plans to do a fun run to raise even more!

Alice decided to spend her £250 Jack Petchey Achievement Award grant on a trip to Palmers Sports Centre for her youth group.

Sola Taiwo, aged 14, attends Thurrock Harriers’ Athletic Club. Sola was the highest female points earner in the Eastern Young Athletes League for three years in a row. She absolutely hates to miss any training sessions and is a very committed young athlete.

She is a positive addition to the group as she always has a smile on her face and wants to help out wherever she can. She has become a role model to the younger athletes due to her dedication to the group. A fellow athlete said about Sola: “she has worked really hard through the last season, she is always willing to help everyone and is just a good role model in general.”

Sola decided to spend her £250 Jack Petchey Achievement Award grant on equipment to help her and the other athletes improve their technique in both track and field. 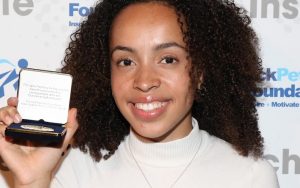 Sir Jack Petchey CBE aged 92, said “I am passionate about our awards scheme which enables young people to be recognised, valued and rewarded for their achievements and positive contributions to society.”