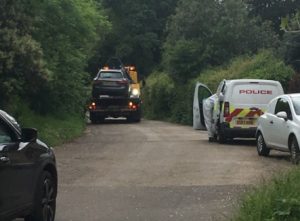 ESSEX Police is continuing to appeal for witnesses after a woman and child were injured during collision in East Tilbury yesterday, Wednesday, May 16.

A 65-year-old woman and a 10-year-old girl were walking in Coronation Avenue when they were in collision with a black Mercedes A-Class at around 8.20am.

The car failed to stop and was found abandoned in Mucking Wharf Road. A 25-year-old man from Basildon was later located at the Five Bells roundabout in Fobbing.

He was arrested on suspicion of causing serious injury by dangerous driving, drink-driving, driving while unfit through drink or drugs, failing to stop after an accident and driving without insurance. He continues to remain in custody for questioning.

The woman remains in hospital in a critical condition while the girl is receiving care for serious injuries.

Inspector Rob Brettell, of the Serious Collision Investigation Team, said: “We are still trying to establish the circumstances leading up to the incident.

“The collision happened during school drop offs and there were many people and motorists in the area.

“We are urging anyone with information, CCTV or dash cam footage to contact the Serious Collision Investigation Unit on 01245 240590 or email collisionappeal@essex.pnn.police.uk. You can also call Crimestoppers anonymously on 0800 555 111.”