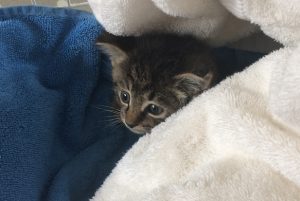 ACO Anna Glozier attended the site but had to request help from the local fire and rescue service and a chimney sweep to find poles long enough to rescue the trapped moggies.

The pipes were six feet underground and around 18 feet long. The four inch gap led to a petrol interceptor and then onto a tank, with no easy escape route.

ACO Glozier said: “There were two separate pipes into the drain and it made it very difficult to find the kittens.

“After three and half hours of attempting the rescue water was used to gently flush the kittens through the pipes.

“It was great team work by all involved. I think these cats have definitely used up one of their nine lives”

“I was on my way between jobs but took a detour as I wanted to help in any way that I could. It certainly was one of my more unusual days at work.”

The kittens are now in RSPCA care recovering from their ordeal. It is likely they were strays but if anyone does recognise them they can ring the RSPCA on 0300 123 4999. Once the kittens are fit and well they will be able to be rehomed.