Review: Out of Focus by Thurrock Courts Players 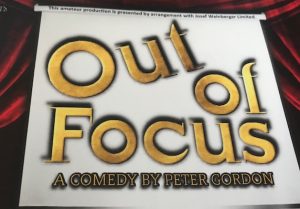 PICKING Peter Gordon’s “Out of Focus” must have seemed a good idea at the time. Thurrock Courts Players had performed his work before (Murdered To Death) and that went down very well. Let us be clear, they all performed this play very well but to this reviewer, it had a narrative that totally failed to engage the audience. In fact, it had the deadly “so what?” factor.

We think it went like this: Scene One: a village hall is triple booked. Downtrodden vicar’s wife gets blame. Scene Two: All the members of the organsisations that we saw in Scene One are rehearsing a pantomime. The common thread was that the downtrodden vicar’s wife was producing the panto in the hope that she could organise something properly.

Tori Grayling played the Vicar’s wife and Tori was excellent. Infact, her final scenes, when she was under the influence, were hilarious. We could go through each actor in the cast and praise them for their watchable performances: Wayne Prince, Jill Snelling and Lisa Chapman were once again very dependable.

The stand out performance was David Carey as Leonard. Over the years, David has turned into a fine comic actor. His performance as the “anorak” character was worth the entry fee alone.

The up and coming performers are also producing reliable turns as well: Stephanie Firth, Anna Catchpole, Shaun Crisp are all becoming very watchable.

However, they were all hamstrung by a dud script that simply didn’t engage this audience member. it was half an hour too long, it had no real centre and what is worse, this reviewer didn’t care.

It was well directed by Mike Jones with a lovely set, a well chosen cast and a lively pace and timing but TCP’s success depends on finding a play that brings into focus the skills of the actors as opposed to working so hard to keep the ship afloat, therefore, we don’t believe any am-dram group could make this dated, inspid play work.

TCP are an award-winning group and are professional enough to acknowledge that they can’t make everything work. From their first production in 1971’s Loot to 2018’s Out of Focus, there will be a few clear cut winners and the odd one, which is out of focus.

Out of Focus is on until Saturday. https://thameside.ticketsolve.com/shows/5758