THE leader of Thurrock Council has revealed his leadership team as the Conservatives set out running the council for another year.

The result of the local elections meant there was 20 Conservative seats, 17 Labour and 12 Thurrock Independents.

On Wednesday night, the first meeting of the year was held at the civic offices in Grays.

This meetng was largely ceremonial with a new mayor selected and the membership of various committees and groups decided. 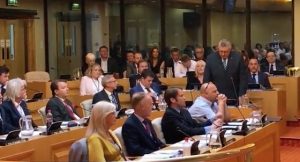