FANS who missed out on tickets to Sir Cliff Richard’s 60th anniversary sell-out tour are being offered a unique opportunity to be part of the action, through a live screening at Vue Thurrock. 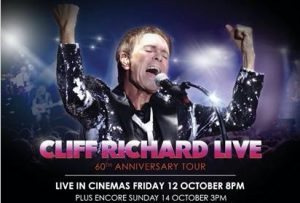 One of the UK’s most popular and well-known musicians, Sir Cliff has 103 album releases, 123 single hits and 14 number ones to his name. His Cliff Richard Live tour celebrates a remarkable 60 year stint in the music business and can be seen exclusively at Vue on Friday 12 October at 8pm. A special encore screening will also be shown on Sunday 14 October to celebrate Sir Cliff’s 78th birthday.

Owain Evans, General Manager at Vue Thurrock, said: “Sir Cliff Richard is a musical icon and it was no surprise that tickets to his tour sold out almost instantly. We’ve been told by his management that they could have easily sold the tour a few times over, so there’s bound to be a number of fans that have been left disappointed.

“Luckily for them, they don’t have to miss out entirely, as these screenings mean they can experience all his incredible energy and passion on stage, in what could be his swansong performance.”

Tickets for the Cliff Richard Live: 60th anniversary tour are on sale now and be can be booked at www.myvue.com.