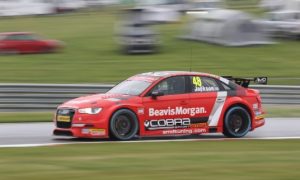 THE AmD with Cobra Exhausts team was unlucky to come away from Thruxton without any points on the board after a challenging third weekend of the Dunlop MSA British Touring Car Championship season.

The West Thurrock-based team headed for the fastest circuit on the calendar hoping to challenge for top 15 places but it would prove to be a tough weekend for drivers Ollie Jackson and Sam Smelt.

Ollie had been eager to add to the points he scored during the opening meeting of the year at Brands Hatch but was on the back foot after qualifying having had to settle for 29th on the grid.

The close nature of the pack meant overtaking would be tough in the opening race, with the Tamworth-based driver only able to work his way up to 25th despite being quicker than a number of his rivals ahead.

A solid drive in race two saw Ollie fight his way to 17th and left him well placed to try and push for points in race three only for contact on the opening lap to force him across the kerbs at the chicane.

Although he was able to run in 16th for the opening laps, the kerb strike had damaged the front right tyre which then let go on lap eight; forcing him into the pits to retire.

Northampton-based team-mate Sam was racing at the fearsome Hampshire venue for the first time in his career and lined up in 32nd spot on the grid for the opening race.

A 28th place finish in the opening race was followed by 24th in race two and 26th in race three as the rookie was able to gain further valuable experience of racing in the highly competitive series.

Having struggled to maintain the progress made in the opening two rounds of the year, Sam will now hope to return to form next time out at Oulton Park.

Ollie Jackson, #48 AmD with Cobra Exhausts Audi S3, said:
“I think we were on the back foot in practice a bit after missing the test and then we mis-read the conditions in qualifying which left us out of position on the grid. We changed the car for the races and just got our heads down to try and work our way forwards.

“With the field as it is, it was hard to make progress but we got into a position where we could try and push for some points in race three. Unfortunately I got hit on the opening lap, which forced me across the kerbs and damaged the front right.

“It’s unfortunate as we could have scored but we have shown decent race pace again and should be going home with something to show for it.”

Sam Smelt, #23 AmD with Cobra Exhausts Audi S3, said:
“This weekend has been a tough one for me as Thruxton is such a unique circuit. Qualifying was difficult and even though the first race went quite well, I struggled in races two and three.

“This is a circuit where I think experience plays a big part and the fact I hadn’t been here before and didn’t have much mileage under my belt didn’t help. I’m hoping that when we go to Oulton Park, I’ll be closer to the pace and can put this weekend behind me and try and build on the results from Brands Hatch and Donington Park.”

Shaun Hollamby, AmD with Cobra Exhausts team principal, said:
“As at Donington Park, this is a weekend when we could have scored points with the Audis and it is unfortunate that we come away from Thruxton without adding to our tally. We were on the back foot after qualifying and it wasn’t easy to make up places in the races, which you could see across the whole field.

“Despite that, Ollie had got himself into a good position for the final race and it was only down to bad luck that he picked up tyre damage as without that, I’m sure he would have brought home some points.

“It was a tough weekend for Sam but this is a challenging circuit for a rookie visiting for the first time and it would have been easy for him to make a mistake and put the car off track. As it was, he picked up three finishes and the extra track time will only help him moving forwards.”