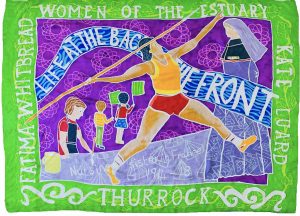 RENOWNED Thurrock-based international outdoor arts company Kinetika will be taking part in a mass participation artwork when it joins PROCESSIONS London on Sunday 10 June to mark the centenary of the first British women gaining the right to vote. PROCESSIONS has been produced by arts charity Artichoke and commissioned by 14-18 NOW, the UK’s arts programme for the First World War centenary. PROCESSIONS will be broadcast live around the UK on BBC One and BBC News

Kinetika is one of 100 organisations across the UK which have been commissioned to create handmade banners in collaboration with female artists for PROCESSIONS. Building on 2017’s Silk River legacy, which connected communities along the lower Thames Estuary, Kinetika has continued to work with Silk River artists from five communities – Barking & Dagenham, Dartford, Purfleet, Gravesham and Southend – to create five silk batik banners, one for each community. The artists drew up a longlist of inspirational local women, past, present and future, either working in their communities or in the public eye across a range of professions. The public were invited to vote on social media to select the women who would be represented on the final banners.

The Inspirational Women who appear on the five banners encompass a huge range of experiences, occupations, backgrounds and talents, ranging from a nineteenth century champion of physical education for women to a 16 year old Youth Mayor. They are:

From Barking and Dagenham: The Ford Factory Sewing Machinists who won a landmark case in 1968 which led to the Equal pay Act 1970, author and entrepreneur Mo Obadina, a motivational speaker, WI Vice President and single mum, and Rachel Stubbs who has overcome dyspraxia and dyslexia to get to University and looks set for a career in film production. The local artists who worked on the banner were Kushnood Ahmed, Susanna Wallis and Rachel Stubbs.

From Purfleet: Kate Luard, a nurse who served in both the Boer War and the First World War, always at or near the front line, Fatima Whitbread MBE two times Olympic medal winning athlete, and Kinetika, female-led arts organisation, working to nurture the new artistic talent in Thurrock communities. The local artists involved were Margaret Hall, Lesley Robinson, Emily Moon and Christine Rowles.

From Southend: Rosina Sky, shopkeeper and suffragette, Lucy Hodges, who despite being blind is a world champion sailor and Maise Riley, Youth Mayor and passionate about creating a better future for Southend. The Southend banner was created with local artists Sally Chinea, Hazel Huber, Jacci Todd and Lisa Meehan.

Other artists who worked on the project across the different areas were Jane Ford, Hattie Crane, Laurence Coates and Jo Beal. They and the other artists will take the banners to PROCESSIONS London on Sunday 10 June.

Kinetika’s Creative Director Ali Pretty said: “It’s been an empowering process, to bring so many local women artists together, and collectively discover the powerful line of Estuary women we come from, and simultaneously to look towards the younger generation who are making the most of the opportunities living and working along The Thames Creative Corridor is about to offer them.”

PROCESSIONS will see women and girls walk together creating a celebratory living artwork. Participants will each be given a wrap to wear in either green, white or violet – the suffragette colours and will be choreographed to walk together through the city streets to form flowing rivers of colour. PROCESSIONS ​takes place simultaneously in the four capitals of the UK, Belfast, Cardiff, Edinburgh and London. Produced by Artichoke and commissioned by 14-18 NOW, it is open to all women and girls* and to take part you can sign up for free at www.processions.co.uk. A free banner making toolkit can be found on the website.
*(*including those who identify as women and non-binary individuals)

The project has been made possible with support from NatWest, the Government Equalities Office, the National Lottery through the Heritage Lottery Fund and Arts Council England, and by the Department for Digital, Culture, Media and Sport.