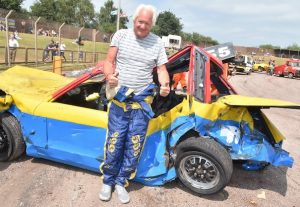 THE Roy Rawlins Testimonial meeting took place at Arena Essex Raceway at the weekend and the Banger stars came out in force to pay tribute to the force of nature that is Roy, who continues to race at the grand old age of 68.

Roy himself took a starring role during Sunday afternoon, coming out for every race possible, despite seemingly getting completely wrecked in each of them. Some sterling work from his pit crew for the day, primarily Kev and Tom Waller, somehow managed to straighten the car to enable Roy to turn in several more laps before inevitably getting demolished again. In Roys trademark style he would then get out a newspaper to read at the wheel whilst the race continued around him. Another moment that endeared him to the crowd was the high five he shared with the man who ensured his demise in the Destruction Derby, Jason ‘Boxer Jack’ Jackson – again conducted whilst the event was still in progress!

Saturday night was given over to an all Ford Granada event with heat wins shared between Jason Jackson and Micky Galloway before Steve Bailey took over, winning the consolation and Final – the latter of which was in the memory of Maya Ford – a young girl sadly taken from us by Meningitis and the catalyst to a series of fund raising days at the venue since, in aid of the Meningitis Research Foundation.

Action was a little sparse on Saturday evening, with many wanting to race the following day. The night did however conclude with a sequence of massive crashes as Banger Racing World Champion, Steve Bolton, over from Northern Ireland, followed Luke Ashton-Jones into the pit bend fence where he was then demolished by a monster hit from Dutchman, Koen Roessink, Roessink then getting destroyed by Mark Cooper.

The real action was reserved for Sunday and the two lively qualifying races were won by Scott Cornish and Jason Jackson. The final saw the stadium buzzing as the top teams on the day, who had largely avoided each other to that point, finally came together in destructive style. There had already been two race stoppages, one to rescue Jeff Smith, victim of a massive crash from Johnny James, and another to check on Sean Gallagher, who’s indecently quick Rover P5 had come to rest on the exit of the pit turn having comprehensively crashed Lewis Price, but folded up around him at the same time. Both drivers were fine, but with only 12 cars for the restart and most of them from the TMT and Midnight Runners teams it looked like the action was over. How wrong we were!

Initially it didn’t seem too promising with Ricky Hutton preferring to attempt to crash his own team mate Charlie Daniels, rather than engage with the opposite team, but Paul Whiteman sparked the warfare by striking Hutton, Hutton then backing into Joey Palmer, Palmer getting destroyed by the Daimler DS420 Limo of Matt Butcher, with the crowd roaring as they sensed what was to come. In quick succession, Cornish destroyed the Limo, Gary Lee went in on Cornish, Charlie Daniels destroyed Whiteman from the opposite direction before Jackson landed the final hit on Lee. This left James Steele as the one remaining car and he duly took the chequered flag.

The next action at Arena Essex is on 24th June when the National Micro Banger World Series reaches round 3, with the Stock Rod English Championship, Lightning Rodsa nd Ministox in support. The start time is 1pm.