A FUNDRAISING match will take place at Corringham Athletic’s ground on Sunday after vandals once more struck the club.

In the latest of a series of incidents, on Sunday (10 June) at around 8pm, committee members were alerted to a fire at the club’s pitches on The Manorway. 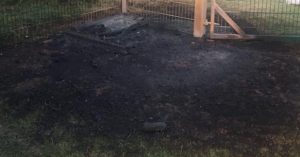 The club’s port-a-loo had been set fire to, causing irreparable damage to the only toilet facility on site but also damaging fencing, signage and a large area of grass.

It is estimated that damage costing about £7,500 to repair was caused by the blaze.

The fire brigade were called to the blaze and a subsequent investigation established the cause of the fire to be arson. The police have been informed. A small group of young people were reported to have been hanging around in the area at the time of the fire.

The fire at the club comes just a day after a large number of volunteers worked to tidy and clear the club’s ground after a successful season, which will be celebrated at a community presentation day in two weeks time.

More than 100 young footballers, ranging age five to 15, play for the club which is run entirely by volunteers.

Club chairman Keith Wilson said: “Corringham Youth Athletic is a not-for-profit club, run by volunteers and funded solely by parents of youngsters in Thurrock who play for the club.

“Losing a port-a-loo to fire and sustaining damage to fencing might seem trivial and menial, but for a club like ours, it’s significant when we’re doing all we can to provide facilities for kids, parents, club members and visiting teams with little resource or income. It was only recently that we were having to pick the port-a-loo up after it had been pushed over during another act of vandalism.

“For the club to fall victim to this sort of mindless, selfish behaviour – and not for the first time – is devastating for us. Especially as so many people gave up their time the day before to help tidy the ground.

“It’s heartening to see, though, that several young members of the club have already started, off their own backs, in trying to raise funds for a replacement and members of the community have also offered support on Facebook.

“We have a good spirit and won’t let this sort of thing deter us from continuing with our aim to grow CAYFC and make it a fantastic community club for all.
The club has set up a Just Giving page for anyone in a position to support the club with replacing these lost facilities. Support can be pledged by visiting the following link.

As a fundraiser on Sunday Corringham Athletic under 12s and St Clere’s under 12s will play a friendly match, kick-off at 10.15am. The club hopes to raise money in food sales and raffle prizes to help contribute to the costs.

One Response to "Arsonists damage equipment at Corringham Athletic’s ground"