Grays Athletic’s Millie is a Superfan!

SUPERFAN Millie has been hailed as the future of Grays Athletic FC after the five-year-old won the Essex County FA’s #CelebrateEssex ‘Supporter’ Award following a poll with nearly 1,200 votes on the @EssexCountyFA Twitter account. 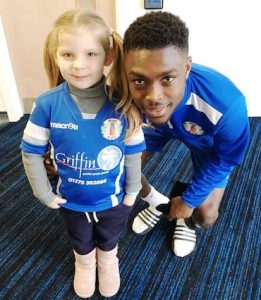 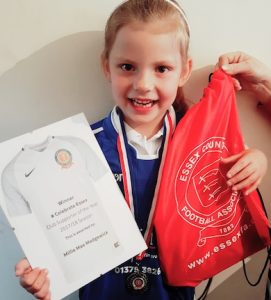 #CelebrateEssex promotes inspirational personal volunteer stories, encouraging new faces to get involved and grow the grassroots community. Once nominations closed in
April, a select group were chosen for a Twitter poll to identify the monthly winner to receive a prize and extra public plaudits. Millie won the vote in front of three other strong challengers.

Athletic have been without a home since they departed The Rec in 2010, and they currently groundshare at Aveley FC’s new Parkside stadium. Playing outside of their home base means they’re especially dependent on the dedication of volunteers to stay afloat, and Millie’s father, Grays’ Kit Man Sim Madgewick, is proud of how his daughter has taken the club to her heart so early.

“She loves it!” he explains. “She wears her Grays shirt to all games and has even worn it to school. It’s just a sense of belonging you get when you’re involved with a club like Grays, wearing that badge on your chest fills you with pride. Despite all the hard times we have faced recently we are still going and, for me, to see Millie have the love for the club that I had at a similar age is magical.”

Millie is described by her father as a “fourth generation Grays supporter”! Her grandad, used to attend matches in the 1960s – still going to games today – then her great grandmother purchased a flat which overlooked Grays’ old ground at The Rec in 1987. The 84-year-old has also attended games this season.

“That’s how I fell in love with the club 31 years ago,” said Sim, “along with my sister, so Millie was then born into it. Nowadays I’m occupied doing my job within the changing rooms and on the bench due the match which leaves Millie to help out with other volunteers within the club!”

“She helps out at every home game, without fail, assisting with raffles, turnstiles and kit. She’s helped prepare the food and drinks in the boardroom and looked after the directors of both clubs. She helps the ground staff put out corner flags, closes gates and wears her pink ‘hi-vis’ vest as a ball girl too. The most important job is for the players as she puts about ten bags of sweets into a bowl!”

Millie chose a special camera as her prize for winning, which will enable her to progress her hobby of photography and capturing videos at matches which heavily feature her favourite player, Ade Cole! “Millie is absolutely fanatical about Ade!” Sim added. “She has his name and number on her shirt. Every single piece of work she does at school or home has Ade written on it.”

“A day doesn’t go by when she doesn’t mention him. And full credit to Ade, he has embraced his superfan all the way. Every home match she walks out with him as his mascot and after every game they eat together, do drawings together and even puzzles. I think, being a primary school teacher’s assistant, Ade knows how to interact with her and they have created an amazing friendship.”

And he has advice for anyone thinking of volunteering at their local club: “It’s like an extended family. Everyone involved in the club is so good with Millie and she loves helping out. From the moment one game ends it’s a constant countdown to the next one. She just can’t wait for matchdays!”

“Go and enjoy being part of your community. You’ll make friends of all ages and you get a sense of belonging. If you’re a club like Grays you get a sense of achievement that a small group of volunteers are running and funding a football club. The supporters will always be there, standing firm.”

Find out more about the #CelebrateEssex Competition, or how to volunteer in grassroots Essex football, at www.essexfa.com. June is the month of the ‘Footie Dad’ on Twitter @EssexCountyFA and information is also shared on Facebook by searching for ‘EssexFootball’.