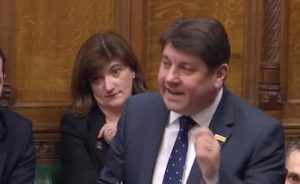 MP for South Basildon and East Thurrock rose on the floor of the House of Commons to ask question on immigration and science.

Mr Metcalfe said: “Does my hon. Friend agree that ending freedom of movement will at long last give us control over who can come to this country, and allow us then to create an immigration system that works for science, without limitless immigration from the EU?

The Parliamentary Under-Secretary of State for Exiting the European Union, Robin Walker said;

“My hon. Friend, who is a great champion of science in the UK, makes a very important point. We want to continue to attract the brightest and best to the UK, particularly those looking to work in our world-leading science and innovation sector.

“As I said earlier, the announcement of the new start-up visas is an important step in showing that a UK immigration policy can do that.

One Response to "Stephen Metcalfe backs end to freedom of movement"