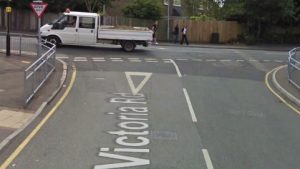 ESSEX Police are appealing for information about two incidents where people had phones taken from after walking home from Stanford-le-Hope train station.

At around 12.40pm on Thursday, June 7, a man left the station and was walking in Chantry Gardens when his phone was knocked out of his hand. Two suspects then ran off with it towards London Road.

They then received a call about a knife point robbery at 1am when a man was approached in Victoria Road with a man holding a knife.

The victim ran off but was caught before the suspect pulled out a knife and ran off with his phone down King Street.

The first man has been described as being black, aged in his late 20s to early 30s, around 5ft 9ins and of a medium build. He wore a dark hooded Puffa style jacket with the hood up, dark bottoms footwear and had his face covered with a mask or a scarf.

The second man has been described as white, aged in his early to mid-20s, around 5ft 10ins, of a skinny build and had short fair or ginger hair. He wore light blue jeans, a light coloured top and trainers.

The man in the second incident has been described as being of a slim build, aged in his 20s, of a slim and around 5ft 10ins. He wore a black or dark blue Puffa jacket with the hood down, dark bottoms, dark footwear, a dark coloured cap and his face was covered with a black scarf.