Come down to Tilbury for Windrush celebrations

PORT of Tilbury hosts celebration to mark SS Empire Windrush 70th anniversary and everyone is invited!

On the 22 June 1948, the Port of Tilbury welcomed 500 people from the Caribbean, who travelled for 30 days from Jamaica aboard the SS Empire Windrush, to begin a new life in Great Britain. 70 years later, on 22 June 2018, the Port will mark this anniversary by hosting a day of celebrations at the London Cruise Terminal where they first arrived.

The FREE Windrush 70 celebrations are being funded by Thurrock Council, Tilbury on the Thames Trust, Tilbury Riverside Project, Heritage Lottery Fund and the Port of Tilbury and everyone is welcome to come along to the cruise terminal at the port between 1.30pm and 6pm on Friday 22 June.

Events on the day will appeal to everyone and will include:

 heritage displays and the story of the Windrush in the spoken word;
 live bands from the William Palmer Trust;
 dancing from local dance groups Elite and Tiny Tappers
 Caribbean food stalls; and face painting with a carnival theme!

Also throughout the event there will be a 16ft specially commissioned ‘Tilbury Docker’ puppet which was made by Kinetika and commissioned by the Tilbury on the Thames Trust to mark the anniversary – you will not miss him!

Charles Hammond, Chief Executive of Forth Ports said: “Everyone at the Port of Tilbury is proud of the part that the port played in the lives of the people aboard the SS Empire Windrush when they arrived 70 years ago and we are looking forward to celebrating this anniversary in the place that they first landed in the UK. Everyone is welcome to come along on the 22 June – it will be a fitting celebration for Windrush 70.”

Jackie Doyle-Price MP said: “The anniversary of the arrival of the SS Empire Windrush is a significant part of our local history. Tilbury was the gateway to the UK for nearly 500 people on board and we are proud of the part we played in this. 70 years on, we will celebrate this event with a day of thanks giving, celebration and fun. I hope everyone who can make it, comes along on the day.” 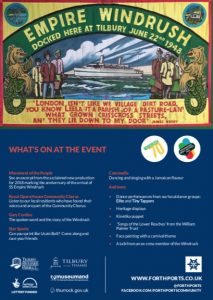 Cllr Deborah Huelin, Thurrock Council’s Portfolio Holder for Communities, said: “The arrival of the SS Empire Windrush in Tilbury was not only an important milestone in the borough’s history, but also signalled the birth of multi-cultural Britain. It is vitally important that we celebrate the contribution of the Windrush generation to our country and we are delighted to have supported various events to mark the 70th anniversary. I hope residents will join us at the Port of Tilbury for what promises to be a fantastic celebration of heritage and culture.”

One Response to "Come down to Tilbury for Windrush celebrations"