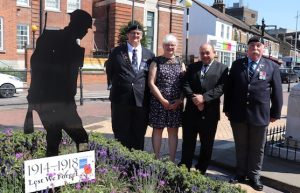 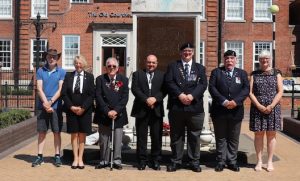 A pair of Silent Soldiers will stand guard at Grays War Memorial from Monday to mark the Centenary of the final year of the First World War.

Work will also take place at war memorials across the borough as Thurrock prepares to mark the centenary of the end of World War One in November.

Cllr Gary Collins, Portfolio Holder for Central Services, said: “The silent soldiers are a reminder of the bravery of all who served in the First World War and a chance for Thurrock Council to support the good work of the Royal British Legion and the Poppy Appeal.

“Thurrock Council Leader, Cllr Rob Gledhill, has allocated funding to ensure our war memorials are ready for commemorative services marking the 100th year since the end of the 1914-1918 war, including cleaning the memorials, installing new planters and tidying up plants and flower beds.”

Rod Oakley, Chairman of the Grays Thurrock Branch Royal British Legion, said: “These two silhouettes are a reminder of the sacrifices millions of ordinary people made during the First World War.

“We have worked together with Thurrock Council to supply one of the silent soldiers for Grays thanks to the generosity of two of our current members, namely Pat Cook and Ken Collins, plus a former military man and local businessman Edward Saxton who left a legacy to the Royal British Legion when he passed away in 2016.”

One Response to "Silent Soldiers at Grays War Memorial"