JORDAN Morgan won the most dramatic of races at Arena Essex on Sunday to secure the Stock Rod English Championship. 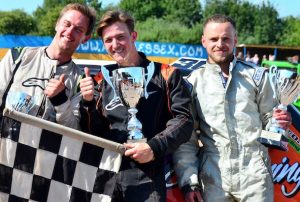 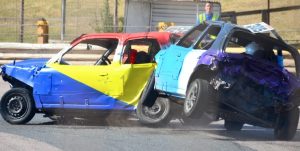 The first heat went the way of Matt Rowling, who drove around the outside of George Simmons to take the lead, Simmonds going spinning as he fought to regain the place.

Luke Cornish lead throughout heat two, although the second place battle was fierce. Ash Sheppard tangled with Jon Turvey in the heat of battle and was turned sideways at the entrance to the home straight, sending Jordan Morgan out to the wall and Adam Daniels spearing onto the speedway track. An oil spillage on the pit bend then caught Alex Martin and Daniels out, losing them both a bundle of positions, leaving Jon Dunn alone to take the fight to Cornish at the end.

With Morgan and Rowling on the front row for the championship race it looked like a straight fight between the two, but they both tangled on the approach to the first corner and Morgan’s car rode up the side of Rowling taking them both out wide. Cornish couldn’t believe his luck as he settled into the lead with Morgan rejoining mid pack and Rowling at the back.

Tyler Scott made a bid for the lead around the outside of Cornish with Jordan Wainwright seeing an opportunity to slip past Scott as the latter’s brave challenge only just failed and he began to slip back through the pack. Cornish and Wainwright then clashed in their battle which delayed them slightly entering the back straight, allowing Adam Daniels to get a run on both of them.

Cornish crowded Daniels into the next bend, sending Daniels up the kerb and as he bounced back on track, taking Cornish and Wainwright wide, who should appear back on the scene – Jordan Morgan! Morgan was back into the lead with George Simmonds similarly coming from nowhere into second. Simmonds had to fight hard to defend his place from a fired up Daniels, who’s best efforts eventually saw him fall back behind his nemesis Cornish and briefly Alex Martin, before Martin was spat out of the pack, dropping to sixth. Morgan was delighted with the win which backs up his British title success earlier this year.

The latest round of the Micro Banger World Series got off to a lively start in the heats with David Smith getting spun and taking a massive hit from Ricky Hutton, which rolled the latter’s car on impact.

Liam Deans thundered Jamie Rayner into the pit bend fence. Deans got a taste of his own medicine a few laps later when Ricky Hutton did likewise to him up at the other bend. Alfie Cornish won both heat races.

The final saw Brad Turner turn around on the pit bend and Callum Harris was more than happy to meet him in a massive head on with Hutton following up with a hit to Harris. Turners car folded up alarmingly but Brad was fine, Nathan Roberts raced away to the win.

Dan Reid won the last race of the day before Alfie Cornish crowned a successful day for him with the Destruction Derby victory.

Jeff Rogers won both Lightning Rod heats before Sam Shirmer won the final, heading home Chris Reeve – who put behind him some terrible luck at recent events. Mark Collins blew up in the fnal stages, spinning to a halt on his own oil, Anthony Lawrence unlucky to go spinning into the stationary car.

Finally Alfie Aldous once again won all three MiniStox races. The fighting was hectic behind him with Charlie Santry and Owen Robbins following him home in the final.

The next action at Arena Essex is in a fortnights time with PRI Bangers back in force along with the Stock rods, 2L Stock Cars and MiniStox. Start time 1pm.