Officers from Thurrock Council’s Housing and Emergency Planning teams have been at the scene of a fire in a flat at George Tilbury House, Chadwell St Mary, working with Essex County Fire and Rescue Service officers and supporting residents.

Cllr Hebb said: “We have been at the scene tonight, and we were all so very relieved to be informed there were no casualties. Clearly home fires can not only be deadly they can lead to cherished memories being lost.

“To those affected tonight, Thurrock Council will be helping you in the coming hours, days and weeks ahead in every way we can.

“The fire service, Thurrock Housing teams, the paramedics and police have handled the matter in an exceptional way and the fact that people were re-entering their homes by 8:15pm is a testament to their amazing work under exceptional pressure.”

Cllr Johnson said: “Thurrock Council are working with residents to make sure that everyone is properly taken care of and offering advice and reassurance to those that need it.

“Seeing the fire service and council officers help walk people back to their homes, letting them know that they were safe, was very reassuring in itself. Neighbours were offering each other help other too – everyone down there really pulled together to help each other. We will continue to help affected residents.”

Thurrock Council will be working with Essex County Fire and Rescue Service to understand the cause of the fire. 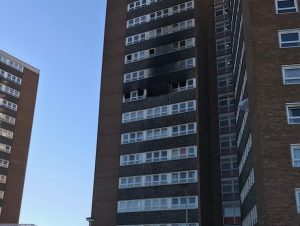 The fire is now out. Firefighters will remain at the scene for a further hour to make sure all the hot spots are cooled. The fire was contained to one flat, although there is smoek smoke damage to the outside of the building surrounding the affected flat.

“When firefighters arrived at the scene, they quickly located the fire in a flat on the 7th floor of the building. Crews immediately set about tackling the fire using the building internal dry riser system. Firefighters worked extremely hard in very hot conditions to contain the fire to the flat and successfully stopped the fire spreading to any other flat. There was no casualties or injuires.

Firefighters were called to a flat fire in 13 storey high-rise building shortly before 6pm this evening. The fire was located in a flat on the 7th floor.

All residents whose flat are NOT affected by the fire have been advised to stay in their flat.

There are no reported injuries. The fire is affecting one flat.

*Update 7pm* The fire is now out. Firefighters will remain at the scene for a further hour to make sure all the hot spots are cooled. The fire was contained to one flat, although there is smoek smoke damage to the outside of the building surrounding the affected flat.

FIRE Crews are in attendance at what appears to a be a blaze in one of the flats. YT understands it is the seventh floor of George Tilbury House.

Update: ROUTES 73A & 83: Due to a building fire on Godman Road, Chadwell St Mary, Buses are subject to delay and diversion.

As this may be a council property, we have contacted Thurrock Council for a statement. 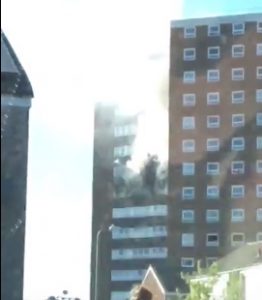 WE have received a report of a fire in a block of flats in Chadwell St Mary.

It appears to be the middle block on Godman Road, off Brentwood Road in Chadwell.

There appears to be smoke coming from a flat several floors above the ground.