MORRISONS Grays is giving its customers the chance to eat like a soldier, with a pie created by ex-servicemen from a famous Armed Forces recipe. 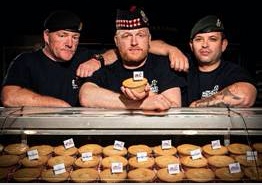 The Morrisons ‘Veterans Pie’, which launches this week at the London Road store will raise money for Walking With The Wounded and includes an original ‘range stew’ recipe served to troops in action.

Launched during Armed Forces Week to support Walking With The Wounded, 50p from the £1.10 pie will be donated to the charity which helps ex-servicemen and women transition successfully from the military to civilian life.

The official range stew recipe is a closely guarded secret but a handful of army veterans helped the supermarket recreate this army classic.

The result is the Morrisons ‘range stew’, made from 100% British Beef steak, smoky bacon and a decent glug of Theakston’s Old Peculiar Ale.

Simon Flores who served with the Light Infantry and helped develop the Veterans Pie said:

“Range stew is what kept us going in some tough times and we’re delighted to share it with Grays. It’s great to see such a legendary army dish raising money for Walking with the Wounded.”

One Response to "Morrisons to serve veteran pies in Grays"