THURROCK Labour this week brought a motion to council calling for the closure of Orsett Hospital to be halted. It asked the council to work with partners in the NHS to look at realistic options to keep the hospital open and for all services to remain within Thurrock. 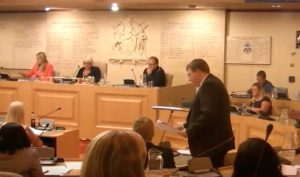 It came as the Tories showed they were determined to press on with the closure, with local MP Jackie Doyle-Price claiming that Orsett Hospital was not a Hospital.

Labour Councillor Oliver Gerrish, who brought the motion said, “We have campaigned against the closure of Orsett Hospital for more than a year. It has been a terrible consultation process. There are no clear plans for how key areas, like renal services, will be delivered in the future, and a real concern that these could be lost out of the borough entirely. In the circumstances, we feel it is wrong that the closure goes ahead and are calling for this whole process to be halted.”

At the council meeting, it emerged that despite recent public statements from the Thurrock Independents, their former leader Graham Snell had put his name to a letter supporting the closure of Orsett Hospital. This was done in his official capacity as chair of Thurrock’s Health Committee. He had also twice refused to join Labour’s campaign to save the Hospital.

Labour councillors reacted with outrage as the contents of the letter were revealed and highlighted the huge difference between the public statements of the Thurrock Independents and how they had dealt with the issue behind closed doors.

Councillor Gerrish concluded, “It’s time to listen to our residents when they strongly oppose the closure of Orsett Hospital. They are right on this and I hope that good sense finally prevails.” 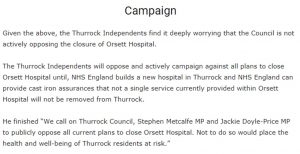 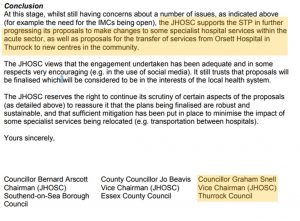