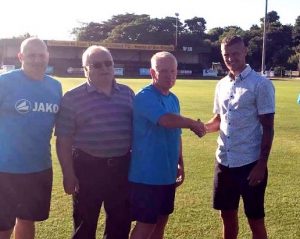 Manager John Coventry said: “I am delighted Paul has agreed to join us, he will bring a significant presence to our club as a player and his knowledge of the game at the very highest level will be something our young players will gain massively from.

“They can’t help but learn from him and as a player he will also be a significant asset to our squad. It may not be the division’s biggest but we are trying to build a team of quality that people will enjoy watching.

“The fact that Paul has joined us when there would have been a lot of doors open to him is a huge thing for our football club.”

Konchesky had his first experience on non-League football after he was one of the first star-name signings at Billericay Town when owner Glenn Tampling attracted a number of top players, but though the Blues eventually went on to have a trophy and promotion-winning season, the media circus that the club became wasn’t to everyone’s taste.

Konchesky left midway through the season and contemplated his future.

A chance meeting with Rocks player Lee Burns on holiday in Morocco a few weeks became the first step back into playing. He said: “After leaving Billericay I thought that was the end of my competitive playing days and I went back to West Ham where I was coaching the young players, which was something I really enjoyed and I think I was learning as much as them.

“However, I still played in a few charity games and I kept myself fit. As this season came around I was thinking about playing again and then I met lee on holiday and he told me all about East Thurrock and he put me in touch with John Coventry.

“I asked around about the club and I heard a lot of good things about it, and also about John and his management style. We met up when I returned and talked about the possibilities.

“John was keen for me to get involved in coaching which was an added attraction, it’s something I enjoy and I also think that I can still offer something as a player so it was a good fit. There is a good coaching set-up here already so I will be contributing as part of a team and I am particularly looking forward to working with some of the younger players at the club who I can see already have potential.

“With some new faces here, including myself, it is going to be about building a team, which is great. It is good to be involved with a friendly club like this and I am very much looking forward to the start of the season.”