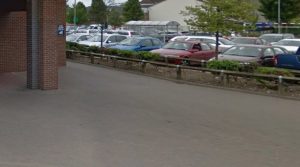 A MAN was found unconscious outside Morrisons supermarket in Grays.

An East of England Ambulance Service spokesperson said: “We were called at 12.40am today (3rd July) to reports of someone not conscious near Morrison, London Road, Grays.

A rapid response vehicle, ambulance and ambulance officer attended and treated a man, believed to be in his 60s.

“The man was taken to hospital in a critical condition.

YT has contacted Essex Police who were able to tell us that no report has been submitted to the coroner.