BACK in 2006, this reporter was working for the Thurrock Gazette. We were working on a feature on alcoholism in Thurrock. As I submitted the article to my editor, Neil Speight, he looked at it and said: “Something is missing…give a me a minute”. A few minutes later he returned with John Hicks, aka Tattoo John 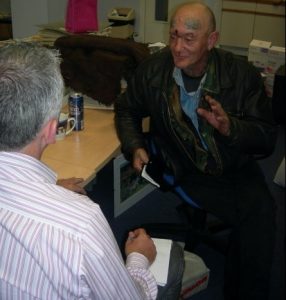 We sat down and over an hour, John told us about his story. He was articulate, funny, honest and warm. He was honest in that he admitted to his frailties and apologised for letting so many people down.

Two years later, I launched YourThurrock.Com. As I wanted to film a lot of my news, one of the first films I made was an interview with John. Again, we went into the story of a settled family life, working at Fords that was ripped apart by alcoholism.

Over the next few years, if I was passing, I would film little pieces with John. Why? well the camera loved him and he was funny.

There were also films where a number of valid points were made. The one below, although laced with humour, makes a number of points on homelessness.

Yes, I was conscious that there might be a line that could be crossed and some could (and did) say it was exploiting an alcoholic.

I was also aware that he did have a dark side that saw him habitually fall foul of the law.

But the films proved very popular. One from 2009 called Summertime Booze has over 16,000 views on youtube. John started to find he would be walking down the streets of Grays and people would shout “John, legend, saw you on youtube!” He was starting to feel like the Rhinestone Cowboy, “Getting cards and letters from people I don’t even know”.

But as YourThurrock came more popular and we settled into a more traditional form, we left the Tattoo John films behind.

Our final film was in February 2015. It now seemed appropriate that one of the last questions I asked him was: “Where did you get your first tattoo?” John explained that it was in August 1977 after Elvis died and if you see the film, his answer to the next question illustrates his quick fire humour.

There was something about the order in John’s life. In interviews, he will describe how he starts most days from his one room in Purfleet, gets the early train, goes to the Baptist church etc…and then the drink. And yes, we realise there may be a massive contradiction in writing about anti-social behaviour in Grays on one hand and then paying tribute to John on the other.

As there is now a criminal investigation, we are, by law, limited to what we can say and on this occasion, we will say farewell to John Hicks.

When I was a child, my father ran a pub called the Brazen Head in Paddington. My father used to point to guys who had fallen on hard times and lecture me not to judge them. In later life, I came to know more. The names of Alexander Heggie or Alastair MacIntosh Blades may mean nothing to you but they told similar stories to John.

So John, we are still rolling and we are not sure if Victor Mature will play you in the film of your life but it was a pleasure to have met you. I hope to be at your funeral and I have a feeling that there may be cards and letters from people you don’t even know….