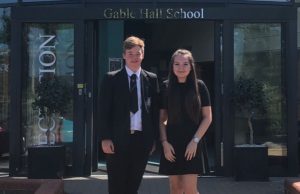 AMY Finch, 14 of Stanford le Hope and Michael Pearn, 15, of Stanford le Hope have been appointed Head Girl and Head Boy of Ortu Gable Hall School for the academic year beginning September 2018. They are replacing ex-students Ella Stanton and Harvey Palmer who graduate this summer after a very successful year at the helm of the Student Council.

The role of Head Girl and Head Boy are popular positions with 14 applicants this year – so competition was keen and standards high.
Amy and Michael will be assisted in their role as lead student advocates and representatives by two deputies, Emma Vincent and Daniel Olowokerie.

The Senior Student Leadership Team take the lead in speaking at formal events, conducting tours with VIPs and supporting students in the lower year groups.

“It was a very competitive process. We had to state our Manifesto and convince the Principal that we were both popular and effective leaders. Do you know how hard that is?” said a delighted Amy.

The Senior Student Leadership Team will work in tandem with Senior Leaders and Governors of the school to secure improvements going forward.

The interview panel was made up of students, teachers and Mr Stokes, the Principal.

The entirety of the Student Senior Leadership Team will be presented to the staff and student body in September 2018.

Mr Stokes, Gable Hall Principal said: “Last year Ella and Harvey did an excellent job in representing the student body and have set an extremely high bar that I’m confident Amy and Michael will meet. I’d like to thank everybody involved, the process is not easy and all our students should be proud of their efforts.”