THURROCK MP Jackie Doyle-Price paid a visit to the set of Coronation Street and ended up behind the bar of the Rovers Return.

The MP visited the cobbled streets in her capacity as Mental Health minister.

Over the last few months, the soap opera has focussed on a number of mental health issues, culminating in the traffic suicide of Aidan Connor.

“The best of British drama making a great contribution to the nation’s health #NHS70”. 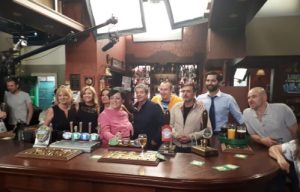