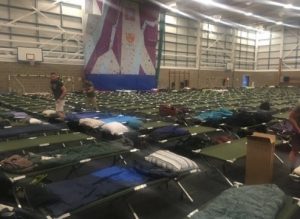 ESSEX Police Assistant Chief Constable Pippa Mills has apologised after the Police Federation said accommodation for some officers drafted in to help with the operation for U.S. President Donald Trump’s visit was unacceptable

Pictures released on social media show cramped lines of camp beds in a large gymnasium for officers to rest on between long shifts.

The Police Federation has complained. Simon Kempton, the organisation’s deputy treasurer in England and Wales, said 300 officers are expected to sleep in the gymnasium with no hot water and restricted access to warm food.

“These officers have been asked to leave their families to travel to another part of the country to help protect the public and the president and all they expect in return is to be treated with some dignity and respect,” he said.

“What’s clear is that anyone overnight who has been arrested by the police would be put in accommodation far superior to what the officers are staying in.”

He said officers at that site are only averaging three to four hours’ sleep ahead of 15-hour shifts because of the conditions.

West Midlands Police and Crime Commissioner David Jamieson said the conditions some of his officers have been “forced to endure” are an “absolute disgrace”.

“No officer should be made to sleep on a camp bed, inches from the floor, in a sports hall with scores of colleagues only metres apart after a 12-hour shift,” he said.

“Some female officers are even having to sleep on mats in glass-fronted squash courts.”

ACC Pippa Mills said: “Essex Police in its role in the national operation facilitiating the US President’s visit to the UK requested a number of additional officers through the national framework.

We worked with local military colleagues to provide accommodation to a significant number of officers travelling from other parts of the country to support our policing requirements. Security, welfare and well-being of those officers has been paramount at all times.

As soon as we became aware of issues surrounding some of the accommodation actions were taken yo rectify them.

The conditions which I have been made aware of are not acceptable. Working with our military partners we have found alternative accommodation. This will address the concerns highlighted.

We are grateful for the support provided by @PFEW_HQ throughout the entire operation.

This is a huge policing effort which had involved every single force in the country at a really busy time for policing.

I appreciate the commitment of every police officer working in Essex and I know how difficult it is to work away from home.

These matters will be picked up as part of our operational debrief for future learning to be captured.

Policing minister Nick Hurd told the Commons that concerns over accommodation are being “managed”.

Replying to an urgent question from shadow policing minister Louise Haigh, Mr Hurd said: “She raised concerns about accommodation for officers in Essex, she was right to do so.

“Those concerns have been raised directly with Essex Police and are being managed.”