Thurrock remembers the genocide of Srebrenica

THE Mayor of Thurrock, the CEO of Thurrock Council, Lyn Carpenter, Thurrock CVS, friends and supporters from the council and community groups attended a event supporting the 23rd anniversary of the genocide in Srebrenica 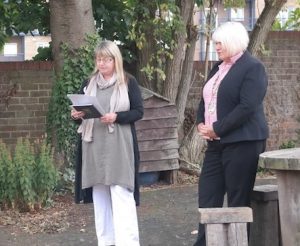 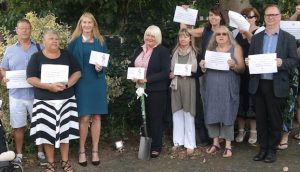 Thurrock CVS created a dedicated space in their garden to plant a rose of remembrance, named ‘Remembering Srebrenica – Ending Sexual Violence as a weapon of War’.

Kristina Jackson from Thurrock CVS said “Thurrock is one of many towns and cities across the country putting on memorial events to challenge the stereotypes and prejudices that feed hatred”.

‘Today is an opportunity to bring communities together to remember the continuous strength and courage of the survivors of the genocide, which was the worst atrocity in Europe since the Second World War. Many of the events in Britain are interfaith events designed to help also challenge prejudice and hate in local communities. Events both honour the victims of this tragedy as well as foster stronger community relations. The theme of this year’s memorial events is “Acts of Courage”. Thurrock Major Barbara Rice

Lee Eggleston from SERICC one of the organisers of the event stated ‘Violence against women, especially rape, has added its own brand of shame to recent wars.

Today we are sending cards to the Association of women war survivors and Strength of Women containing messages of solidarity and support to women in Bosnia. Whilst there are important differences to recognise between sexual violence as part of strategic policy of ‘ethnic cleansing’ and the ongoing prevalence experienced by women & girls in so called peace time, the root causes are the same. We at Rape Crisis know very well the devastation sexual violence causes to individuals, families and communities. We work with victims and survivors who often struggle to talk about their experiences due to shame, stigma, being blamed and not believed”.
To our sisters in Bosnia & Herzegovina, we stand in solidarity with you.

Your courage and strength are our inspiration. #srebrenica

One Response to "Thurrock remembers the genocide of Srebrenica"