Bridge Road in Grays sealed off by police after attack

“We are appealing for information after two people were assaulted following an argument in New Road, Grays, at around 12.50am today, Saturday, July 14.

A man and woman were walking when they were involved in an altercation with three suspects – believed to be two men and a woman.

The woman, aged in her 20s, was punched, pulled to the ground and kicked by two of the suspects.

The man suffered a wound under his arm pit. Neither required hospital treatment.

The suspects then drove from the scene in what has been described as a blue Peugeot.

“We received a call at 12.50am today, Saturday, July 14, after two people were assaulted following an altercation in New Road, Grays.

“We received reports that a man and a woman, aged in their 20s, were approached and attacked by three suspects who fled the scene. Neither required hospital treatment.

AN AREA OF Bridge Road in Grays has been sealed off by the police.

The exact area is the small bridge close to the Seabrooke estate.

YT has contacted the police and is awaiting a response. 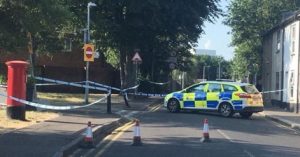