*Update 9pm* The fire is now out. Five fire engines and two off road vehicles (pinzgauers) will remain on scene for the next few hours to continue dampening it down and ensuring hot spots are extinguished.

“Crews have worked extremely well in very tough conditions today. At its worst, the incident was affecting around 1km squared of very dry hedgerow and shrub land and spreading very quickly.

“It’s only thanks to the hard work of our skilled firefighters that the fire was controlled before it spread any further, meaning we avoided any injuries or property damage.

“Thanks also to crews from London Fire Brigade for their assistance and to colleagues from Essex Police for their support in in keeping the public safe.”

The fire is under control and we’re moving a road block further down to help ease congestion. People have been returning to their plots and we’re currently allowing small vehicles to use Buckles Lane safely.
HGVs won’t be able to pass. 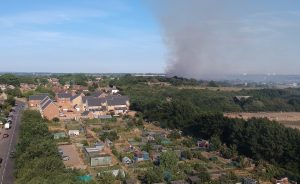 *Update 7:15pm* Firefighters have done an excellent job to stop the fire spreading to a number of caravans in area affected by fire. No properties have been affected.

The officer in charge reports that firefighters are making good progress in tackling the fire. There are currently 15 fire engines plus two water bowsers at the scene along with several officers. Firefighters have worked very quickly to surround the fire and get it under control.

Firefighters were called to a large area of grass on fire in South Ockendon.

The area measured approximately 100m (squared). The field fire is located very near to a caravan park, so the first crews to get to the incident requested extra firefighters to assist at the scene.

We have received a report of a fire in the South Ockendon area.

It appears to be from fields east of Mollands Lane/Buckles Lane.

YT understands that the fire service are in attendance. 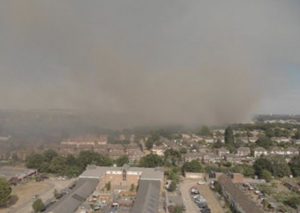