Thurrock student performs at the Royal Opera House in London 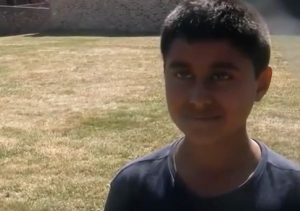 Thurrock student performs at the Royal Opera House in London

ELEVEN-year-old Ashley Palipana from Grays has taken to the stage in Covent Garden in Barrie Kosky’s production of Puccini’s Carmen at the Royal Opera House after joining the ROH Youth Opera Company.

Ashley, a Year 6 student at Belmont Castle Academy, attended the Royal Opera House’s Big Sing event in Thurrock in 2015 and joined the Youth Opera Company in 2016. Through this, he was selected to perform with the Royal Opera in Carmen on the main stage in Covent Garden. He was part of the Children’s Chorus in Act One of the opera and appeared in all 12 performances.

Ashley is a singer, actor and dancer, and has been singing from the age of two. He has appeared on television as well as well as performing with the Royal Opera. Ashley said of his performance in Carmen ‘I wasn’t nervous at all. It was really exciting and I wanted to impress the audience. I loved dressing up as a soldier and appearing on the main stage. The Youth Opera Company is really fun and I’m looking forward to doing more shows with the Company. Singing opera is my favourite thing.’

Ashley comes from a talented family; his mother was a dancer and his aunt and uncle were artists. Donna, his mother says ‘Ashley is a very hard working. I am very proud of his achievements. He is a role model and an inspiration to the other children.’

Jillian Barker, ROH Director of Learning and Participation said: ‘The Youth Opera Company is a very important part of the ROH family and Thurrock is our second home. We are thrilled that Ashley, a young Thurrock resident, is part of the Youth Opera Company and in the last two years has performed at the ROH, in Covent Garden Piazza and on the stage in our extraordinary new production of Carmen. We are deeply committed to giving talented young people the chance to develop their singing and performing skills as a way of building artists and audiences of the future.’

To find out more about the Royal Opera House Youth Opera Company and other opportunities for to get involved, please go to www.roh.org.uk/learning/young-people