Athletics: Wonderful performances by Theo and Funminiyi in English Champs 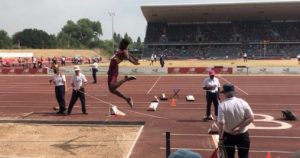 Theo won silver in Long Jump with a personal best of 6.92 in the Inter Boys competition which earned him his 2nd England vest. Funminiyi, in Inter-Girl competition, won Bronze in LJ with 5.81. She also earned her 1st England Vest; Funminiyi and Theo are both heading to Edinburgh on Saturday (21st July) representing England.
Ruby as 1st year Inter-Girl reached the semi final in 80mHurdle with 11.77s

The English Schools Cup Final held in Gateshead on 7th July also saw Chloe Brand compete with Coopers & Coburn School, not only did she win the 300m with a pb of 46.3 but her year group won.