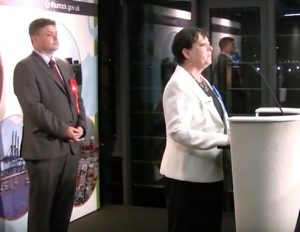 A PROSPECTIVE parliamentary candidate for Thurrock has challenged MP Jackie Doyle-Price to a public debate on the future of Orsett Hospital.

Grays Thurrock councillor, John Kent said: “Our current MP and health minister, Jackie Doyle-Price, has said the closure of Orsett is the right thing to do.

“I think it is only right she should defend that position to the people of our borough and I’m willing to debate it with her any time, any place, anywhere.”

“Remember, our MP is a health minister, a junior one, but still a health minister. Perhaps she has privileged information from the depths of the health department or the managers of the NHS, something that makes her ignore what local people want.”

He said: “There is no doubt the NHS is a marvellous organisation. Medically – the doctors and nurses, the specialists, the innovators and the scientists – it is unrivalled.

“But as we know, the NHS relies on government for its funding and I fear it is these bean-counters that have put Orsett in this position and it is these same people who aim to deny us our own hospital.

“Instead of supporting local people and fighting for our hospital, our MP seems to have joined the bean counter brigade, but she should have an opportunity to defend herself.

“That’s why I have issued this invitation – as I said earlier, any time, any place, anywhere.”

The invitation was sent on Tuesday July 24th. To date, Ms Doyle-Price has not responded.