Tilbury’s Katie is now a star in EastEnders 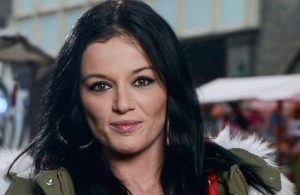 A TILBURY actress is now a star of East Enders in her role as Hayley Slater.

Katie Jarvis made her acting debut in the 2008 film, Fish Tank. Infact how she got the role was the stuff of movie legend. An agent was in Tilbury scouting locations when they saw Katie having an argument with her boyfriend. They approached Katie as they thought she would be perfect for the starring role of Mia. The film, directed by Andrea Arnold was released to great acclaim.

Over the past ten years, Katie has dipped her toes across the pond but also concentrated on bringing up two children.

Since February, Katie has appeared in BBC1’s East Enders as a relative of the chaotic Slateer family. Her role has grown and grown. With her character now pregnant with Alfie’s child, Katie may be in the popular soap opera for the long haul.

It has been a long but fruitful journey since that day at Tilbury Railway Station.