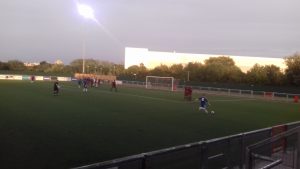 The Premier Division began on Friday night at the Harlow Arena as Woodford Town thrashed Leyton Athletic.  Ola Ogunwamide put the hosts ahead before Chinua Phinn-Archer doubled his sides lead and when Ethan Kessel made it three just before the hour the game was done.  Ogunwamide did add a fourth for the hosts and although Leyton netted a consolation through Dwade James late on it was too little too late for the Walthamstow side.  Onto Saturday’s action and a stoppage time strike from Jeffrey Cobblah saw The Tons edge past Tower Hamlets at The Old Spotted Dog, whilst at Lower Road Hullbridge Sports and Barkingside played out a goalless draw in their opening game of the season.  Ex-Ilford striker Carl Mullings came back to haunt his old club, netting two first half goals for his current club Stansted as they took a 2-0 half time lead into the changing rooms, and Sam West netted a third in the second period to see the Airportmen leave with a opening day victory at Cricklefield.  Southend Manor defeated Enfield at Southchurch Park to get their season off to a good start, with the goals coming from Alfie Linfield and Charlie Burns in the final twenty minutes of that one.  At The Hawthorns Stuart Zanone struck a hat-trick as Takeley laid down an early marker by thrashing Stanway Rovers 5-1 with the other goals coming from Mitchell Das and Bryn Thorpe as the Station Road outfit went top of the table on goal difference, and at Kitchener Road Walthamstow were held by Hoddesdon Town.  James Peagram put the hosts ahead however Hoddesdon turned it around to lead 2-1 thanks to Scott Hayes and then another free touch from a corner, however the hosts did find a leveller through Christian Owusu to pick up a point in their opener.  And finally at Mayesbrook Park Sawbridgeworth Town claimed all three points after they won an entertaining encounter against West Essex.  Josh Knight had put the Robins ahead only for Greg Frederick to level, but Lewis Roberts then restored the visitors lead once again before Tom Macleod levelled for the hosts once again; Roberts then added his second and Sawbo’s winner with just over twenty minutes remaining to give the visitors an enjoyable journey home.

Burnham Ramblers came from two goals down at half time to salvage a draw against Lopes Tavares London at Leslie Field, whilst at Rosemary Lane Halstead blew a two goal lead to draw at home to May & Baker.  Jake Brown had given Halstead the lead on his 100th appearance and Jordan Pavett doubled their lead, but the visitors managed to comeback to earn a late draw.  Over at Royal Oak an entertaining encounter saw Harwich and Ensign share six goals, Locke put the hosts ahead early on before Heath levelled, only for Ensign to retake the lead through Sorrell after a defensive error.  And when Hillard gave the visitors a two goal cushion just before half time, you thought they were the side in control.  But there was time for Harwich to reduce the deficit before the break when Palmer struck home a low effort, and the hosts were only one goal behind at the break.  Ensign’s Barnby was then shown a red card in the second period, and the hosts took advantage to level the contest up when Richardson scored a brilliant long range effort, which meant the game ended all square in the end.  At Eastcliff Holland got their season off to a flyer with a 3-0 win over Braintree Town Reserves, and Little Oakley came from behind to defeat Hashtag United thanks to goals from Harry Mann, Stephen Polley and Sam Eldridge.  Hashtag had lead and had also missed a penalty prior to the hosts comeback but it’s a terrific win for the hosts that.  Finally Wivenhoe Town and Wormley Rovers played out a 1-1 draw, George Smith had put the hosts ahead with a low shot from outside the area but the visitors levelled thanks to a close range header.

Here are next week’s fixtures:-

May & Baker vs Harwich & Parkeston