Arena Essex: Nigel proves to be the top Lightning Rod

CHARLIE Santry won both qualifying heats for the Mini Stox English Championship at Arena Essex on Sunday and duly took pole position for the main event. 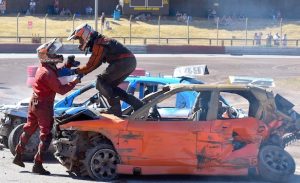 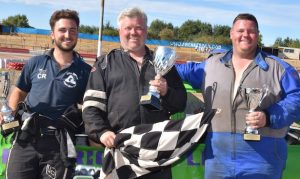 Throughout the race he was shadowed by top of the points youngster – Danny Elbourn, who made his move on the last corner bumpering Santry wide. But Santry fended off the attack and took the flag just a few inches ahead of his rival.

Further back there was fierce fighting for the places with Warren Darby coming out on top.

The Lightning Rod Essex Championship went the way of Nigel Carroll who got past pole position man Rob Merritt in the very early stages. Merritt went for a spin shortly thereafter allowing Connor Reeve to take second place, defending the place for much of the distance from Anthony Lawrence. Lawrence was left ruing a first qualifying heat crash which saw him black flagged when his drivers door parted company with the car.

Alfie Jones drove out of his skin to keep current Stock Car form man Nathan Roberts behind him in the Stock Car final. Roberts was just unable to get within striking distance on the final bend. The first race of the day was sensational with bumperwork going on all over the oval, Dave Palmer lost a wheel in the closing moments and there was a big crash across the finish line when Bernie Reeve tagged Nick Glover into the wall.

An impromptu Destruction Derby broke out amongst the small National Banger entry during the final. Whilst Jason Jackson took the race win, Billy Crittenden started off the demolition by following World Champion, Adam Hitchcock into the pit bend wall, Hitchcock then fighting back with a number of head on collisions with Crittenden. John Golden then became embroiled in the three way fight to become the last car running and he subsequently struck the last blows to both Crittenden and Hitchcock, all three climbing from their cars to the cheers of the crowd.