COUNCILLORS on Thurrock’s planning committee have unanimously approved an application to redevelop a famous art-deco cinema into a bar.

The proposal from JD Wetherspoons will see the State Cinema, on George Street in Grays, repaired, refurbished and transformed into a bar complete with beer garden.

It is estimated that the scheme will bring 60 new jobs to the borough and cost up to £3million.

A planning officer told councillors: “This application is in essence about restoration of this building which has been suffering for quite a while.

“It is an important building but it is on the ‘at risk’ register due to water damage, if we continue as we are things could get worse.”

The cinema opened in 1938 and was one of the most modern cinemas of its kind at the time and with a capacity of 2,200, it was also one of the largest in Essex.

It closed in 1988 but remained involved in the movie business through an appearance in the box office hit Who Framed Roger Rabbit and ten years later one of cinema’s most iconic monsters crashed into the building in a promotional video made for the 1998 movie Godzilla. 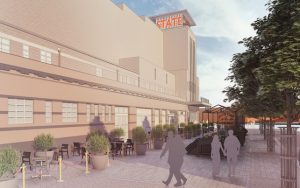 The cinema is a grade II listed building and Wetherspoons will be required to preserve its iconic art deco appearance.

However, the change of use will require some modifications which are considered acceptable by Historic England to achieve the goal of getting the building back into active use.

One of the largest of these changes will be making large holes in the external walls to install three large windows.

An agent speaking on behalf of JD Wetherspoon told the committee: “We have been working on this scheme for three and a half years now, together with the council and Historic England. We think we’ve evolved the scheme into a position where this building can be reused, it can be saved and it can function with minimal impact to the building.”

He added that there will be a full refurbishment internally and externally.