“We have charged two men with drugs offences after they stopped by our Op Raptor West officers.
Jimmy Mukendi, 22, of Manford Way, Chigwell, was charged with possession with intent to supply heroin and crack cocaine, possession of a firearm, possession of ammunition and two charges of possession of a knife in a public place.

Keanu Hill, 23, of London Road, Grays, was charged with possession with intent to supply crack cocaine.

They have both been remanded to appear at Basildon Magistrates’ Court tomorrow, Monday, August 20.

“We arrested a man in Grays town at around 5pm on Friday, August 17, after searching him and finding wraps of drugs.

“We then stopped a vehicle in West Thurrock Way, Grays, at around 8.30pm that day and found drugs, knives, a shotgun and ammunition”.

ESSEX Police has arrested man on suspicion of possession with intent to supply drugs, possession of firearms offences and possession of a knife after stopping a car in Grays. 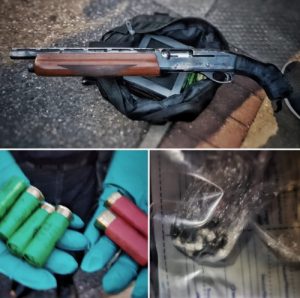 A police spokesperson said: “While searching the car we found what we believe to be heroin and crack cocaine along with a knife and a shotgun.

“A 22-year-old man from Chigwell arrested at the scene remains in custody for questioning”.