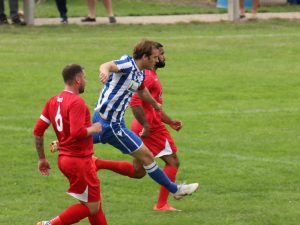 Takeley made it three league wins out of three after a handy 4-1 win over Walthamstow. Stuart Zanone scored twice in the opening half before Charlie Cole made it 3-0 in the 78th minute. James Peagram pulled one back for the visitors two minutes later but Cole then popped up to score his second of the afternoon and to complete a decent win for the early pace setters.  Hoddesdon Town are second after a 2-1 win at Southend Manor. It took the visitors a mere three minutes to open their account as Harry Bushell hit the target early on. Manor were back on level terms within a quarter of an hour courtesy of Rhys Fatt but Joss Lillis netted the winner on the hour to seal the points for Hoddesdon Town.  Hullbridge Sports continued their good start to the season with a 2-1 over Stansted. The hosts took the lead in the 7th minute when Luke Hornsley weaved his way onto the Stansted box before firing a shot into the net. But a defensive mix-up offered Carl Mullings the opportunity to level the game with the easiest of finishes. However Andre Gumbs then provided Hullbridge with a spectacular winning goal, unleashing a powerful shot from just outside the box that screamed past the Stansted keeper before thumping into the roof of the net. Quickest goal of the day belong to Calvin Poku who needed less than sixty seconds to fire Redbridge into the lead at Mile End Stadium. The hosts then gifted the Motormen a second goal, before Poku added a second in the second half. Amon Walton-Owen bagged a consolation for the hosts just before the end and the defeat means that Tower Hamlets have yet to post a win from their opening three league games. Stanway Rovers are winless and pointless after they were gunned down by a Eusebio Da Silva brace that earned Clapton a 2-0 away win. Danny Martin kept a clean sheet for Clapton, and Jarvis Monk did the same for Sawbridgeworth Town who overcame Woodford Town via a solitary goal which was supplied by Joseph Wright. Barkingside made it five competitive games in a row where they have failed to score as their game with Enfield produced another goalless draw. Whilst the Side may not be cracking their opponents defences, they could take solace in the fact that Mike Breckenridge and his defence have now kept four clean sheets this term. James Scammell the Leyton Athletic keeper is also collecting clean sheets; the goalless draw with Ilford was his fourth clean sheet this term, while Ilford’s Hugo Rosetti collected another one himself to bring his collection up to two. There was certainly no lack of action at Caton Lane as Saffron Walden Town and Sporting Bengal United shared a point apiece from an eight goal thriller. Charlie Portway opened proceedings from the penalty spot in the 13th minute but the Bloods held that lead for a mere two minutes as Tony Cookey rifled home the equaliser. The hosts then re-took the lead tow minutes later via as Portway added his second of the afternoon, and that lead was then extended nine minutes later via Lewis Francis. Sporting Bengal reduced arrears two minutes after the re-start  via Zakariya Haque, but Portway then completed his hat-trick, his second in two games, just after the hour mark to give his side a two-goal cushion once again. But Ashaan Siddik then reduced that lead in the 80th minute and then were back on terms three minutes later as Steven Carvell notched the goal that saw his side travel back to East London with a share of the spoils.