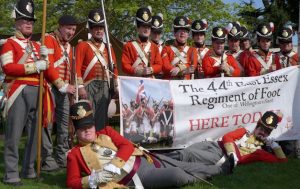 On Saturday 15th and Sunday 16th June, some of the soldiers featured in ITV’s new production of Vanity Fair will take up garrison duty in Tilbury Fort, Tilbury, Essex.

William Makepeace Thackeray’s classic novel is set at during the Napoleonic Wars, and the soldiers of Wellington’s army, and the 44th East Essex Regiment specifically, are portrayed in the new TV series.

The 44th East Essex Regiment of Foot, one of the country’s foremost Napoleonic re-enactment and living history groups, will be setting up a 19th Century tented camp within the walls of the fort, which is run and maintained by English Heritage.

Visitor’s to this historic site will see the troops drilling and firing the famous Brown Bess Musket, finding out how the King’s soldiers lived and played, how they were disciplined at courts martial and how the officers settled their disputes, sometimes by duelling.

The 44th East Essex Regiment, one of Lord Wellington’s finest, will be on hand all weekend to talk to the public, explain the way of life on campaign for the officers, soldiers and camp followers of King George’s regiments. This is your chance to see the preparations the regiment will be making before they embark for Spain and experience the smell of the powder and rattle of the cannonball at first hand.

There is something for all the family, including the famous recruiting party where anyone can join in, young and old, and learn how to drill under the strict command of our kindly serjeant!

One Response to "The Soldiers of Vanity Fair at Tilbury Fort"