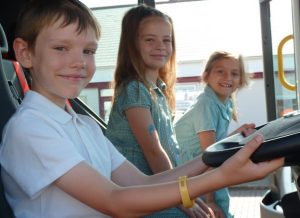 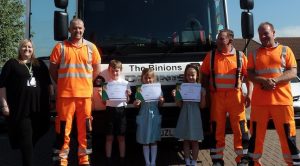 THURROCK’S waste is now being collected by The Binions, Shred Sheeran, Binney Jones and Lord of the Bins among others following a hugely successful competition which saw the borough’s primary school pupils suggest names for the new fleet.

Youngsters from local primary schools took part in a competition to come up with new and original names for the 28 new freighters which have been recently added to Thurrock Council’s fleet.

Winners have been given a certificate and goody bag to mark their achievement. Some pupils received their prizes at a special a special assembly which included a visit from members of the waste team.

The overall winner, whose entry got the most votes from the waste collection team, was eight year-old George Bridge, from Warren Primary, who chose the name The Binions.

Cllr Aaron Watkins, Portfolio Holder for Environment, said: “Well done to everyone who took part and especially well done to the winners. This has been a fantastic way to name our new fleet of 28 freighters. We received over 950 entries from schools across the borough. It’s given us a chance to share the importance of recycling, waste disposal and the need to look after our environment with pupils.”