JUBILANT Gable Hall students celebrated a 73% pass rate in English and a 68% pass rate in Maths (Thursday 23 August 2018) during its GCSE results morning.

Staff, students and parents were particularly pleased with the significant improvements in English, Maths and Science, with 77% of pupils achieving a grade 4 or above in a Science qualification.

Mr Clive Stokes, Principal of Ortu Gable Hall School, said: “Coupled with a superb set of results from Ortu 6th Form Centre last week, our class of 2018 will have excellent opportunities for their next steps based on these fantastic GCSE results, indeed more than a hundred have opted to stay on in the 6th Form. I am so proud of them and deeply grateful for the part that staff and parents have played in their success”.

“They have done the school community and importantly – themselves proud and I wish all our pupils every luck for the future”, he added. 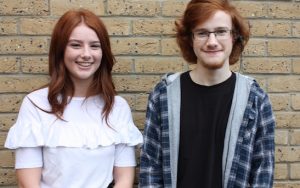 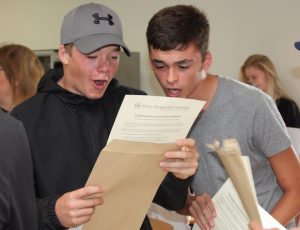 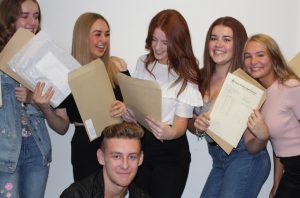 Ella is attending Palmers College in Grays in September, as it is close to where she lives and offers similar courses to the Ortu Sixth Form Centre.

Pleased with her results, Ella said: “I did better than I expected.

“I’m very sad to leave, I would have liked to have come here for Sixth Form but there was a timetable clash in two of my choice of courses.

“I’ve had the best time here… So many teachers are exceptional. My English teacher is amazing – and particularly the whole Performing Arts department is amazing – there are so many shows, that’s been my highlight.”

“I’ve passed in all my exams which I’m really, really happy with today. It’s been amazing news. I was head boy for the last year”

“Gable hall has been an amazing milestone in my life – a beautiful experience and I’d definitely recommend it to anyone. The teachers here are so hardworking. They’ve put so much effort into me and my classmates and I’m so grateful to all of them.”

Harley is going to Seevic in Benfleet in September to transform his video gaming hobby into a marketable qualification and will be studying a video gaming design and development course.

Former Deputy Head Girl, Maya Price from Stanford-Le-Hope, who achieved 12 higher grade passes, including 2 grade 9s in Biology and PE, and 3 grade 8s in English, Chemistry and Physics, as well as 5 A//7 grades.

Like hundreds of her classmates, Maya is staying on to attend the Ortu 6th Form Centre in September. She said “The Ortu 6th Form Centre offered all the courses I want to study. It’s local, I know my way around and know all the teachers. I’ve enjoyed my time at Gable Hall. Mr Dixon, my form teacher has been so good to me – I would recommend Gable Hall if somebody was thinking about coming here, it’s been really good.”

Maya is going on to study Psychology, Biology and English Literature. Although she is unsure about her long-term career, she has chosen these subjects to broaden her opportunities after she has finished her A-Levels.

There were several other outstanding achievements including Mollie Lyon with 2 grade 9s in English: Emily Cross, Madeleine Howell, Logan Musgrove, Ben Sargeant, Neve Teager and Jemma Thompson were amongst an elite handful of students celebrating a grade 9 in English. Liam Berry and Isabelle Moran also achieved grade 9 in Maths.